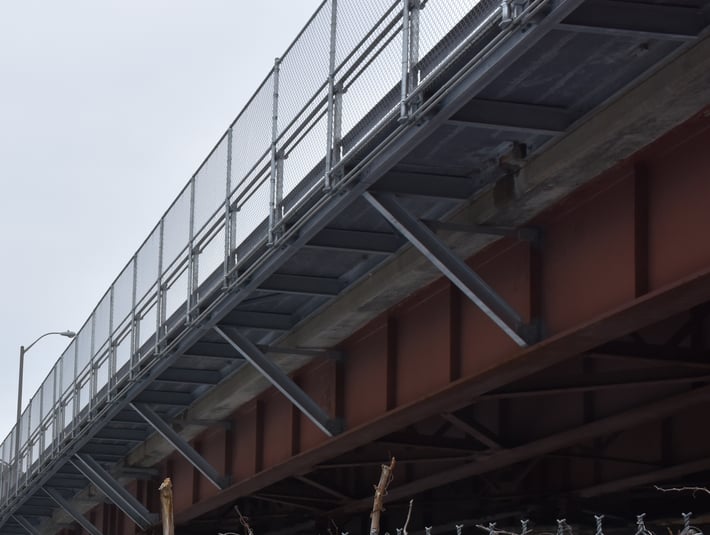 A State of New York, Office of General Services (OGS) crew was left with a weighty problem when a routine 2017 inspection of a 17-year-old pedestrian bridge walkway in downtown Albany revealed deterioration due to salt and ice. The sidewalk crossing [near I-787] serves as a vital link between Department of Environmental Conservation, Parks and Recreation, Empire State Development and Environmental Facilities Corporation and Annex OGS offices and Water Street parking lots, supporting daily foot traffic of nearly 700 state employees. To eliminate the need for multiple shutdowns, OGS decided to replace all components of the 716 ft. structure. OGS also decided to enlarge the sidewalk. But traditional concrete proved too heavy for the vehicle bridge structure. Lightweight concrete was considered and discarded as a viable solution. An internet search led OGS to Composite Advantage’s Fiber Reinforced Polymer (FRP) FiberSPAN-C cantilever sidewalk system. The high-strength, lightweight, corrosion resistant decking proved to be an ideal alternative.

FiberSPAN-C allows a lightweight pedestrian bridge to be cantilevered off a vehicle bridge. The cost effective FRP panels are 80 percent lighter than reinforced concrete panels. Because the cantilevered sidewalk is prefabricated, construction is quicker and installation costs lower. FRP composite material’s corrosion resistance to chemicals and waters means zero maintenance for a structure that will last nearly 100 years. 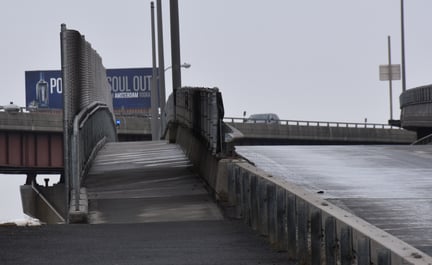 The original structure had a concrete sidewalk with a depth of 4 in. It took only 6 years for the bottoms of the sidewalk deck pans to rust. The new design initially retained a 4-in. depth so as not to reduce the rating of bridge members. OGS approved use of FRP and its design calculations in June 2017. Uniform live load was 75 psf with mid-span deflection limited to L/400.  Wind uplift load was 30 psf. Dead plus live load bending strain was limited to 20 percent (to ensure a strength safety factor greater than 5). Traditional beam bending equations were used to analyze FiberSPAN-C deck panels.

The new cantilever sidewalk was 763 ft. and 64 ¼ in. wide.  Deck thickness was 3 7/8 in. with 1/8 in. wear surface for a total thickness of 4 in. to match the original sidewalk.  To enhance pedestrian safety, a non-slip polymer aggregate overlay was applied in the factory. 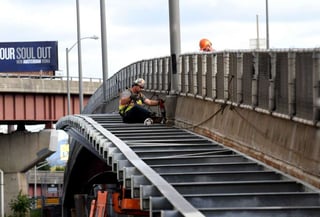