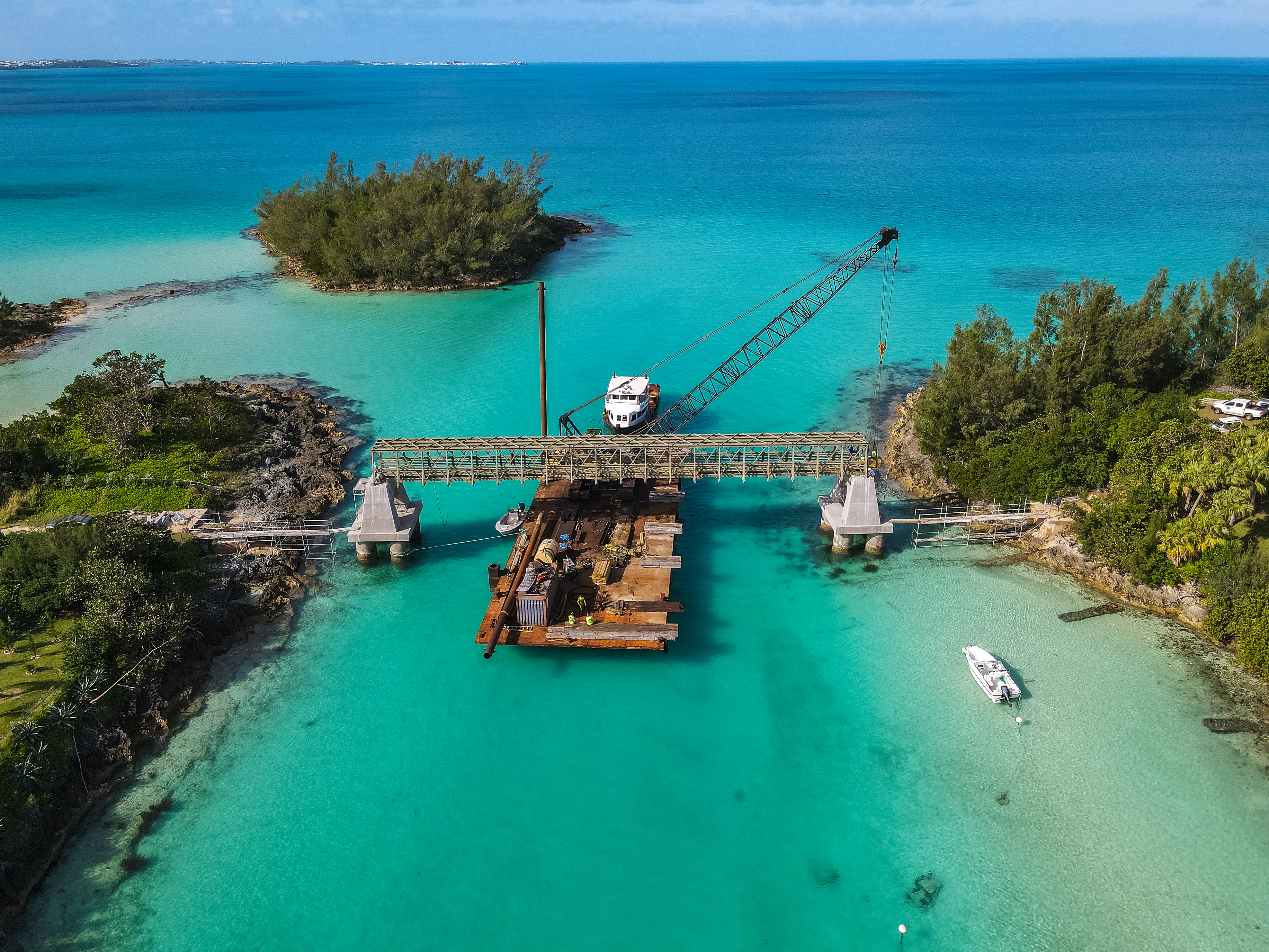 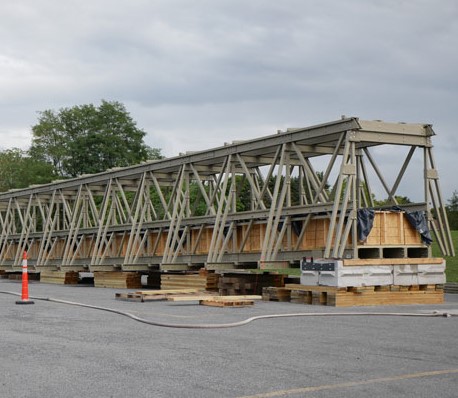 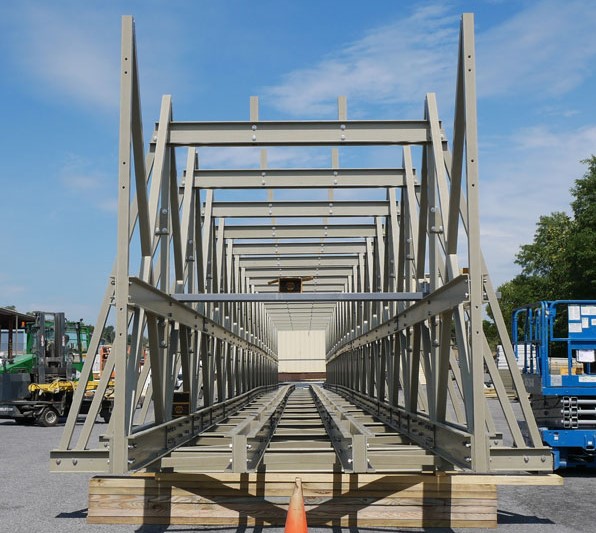 Overview: In 2012, the Murphy family formed a local charity— Friends of Bermuda Railway Trail—and launched a project to reconnect the historic Bermuda Railway route into a single, continuous trail for pedestrians and cyclists. Flatts Inlet, one of six major trail breaks, required a bridge to extend visitor access to the island’s natural beauty. Corrosion-resistant fiber reinforced polymer (FRP) was the right material option for Bermuda’s salty, harsh environment. FRP’s flexibility allowed engineers to design and build the longest pultruded composite bridge in the world; one that was easily assembled on site and lifted on to exiting pylons with a single crane.

Public green space is in short supply on the tiny, highly urbanized island of Bermuda says Dr. Tucker Murphy. The fish hook-shaped limestone outcrop of land is just 21 miles long and 1.75 miles wide, yet it houses 60,000 residents and attracts approximately 800,000 visitors a year.

“Apart from the sea, we don’t have a lot of open space,” he adds. “You don’t really want to ride a bike or walk on one of our three roads. It’s a tight fit. You have cars on one side and the ocean on the other.”

The park is the site of the historic Bermuda Railway. The 21.7-mile carrier line was once the primary mode of transportation for passengers and freight from 1931 to 1948.

“At the time, it was one of the most expensive railways in the world to build,” Tucker Murphy says. “The track had to be constructed along the coastline and included 33 bridges and trestles.”

The trail—now divided into nine sections that range from 1 mile to 3 ¾ miles long—attempts to follow the abandoned rail bed, but the disjointed, broken path makes access problematic for pedestrians and cyclists.

“We wanted to contribute something that would connect the landscape and the community,” he continues. “Laura worked for the Department of Planning at the time and had a lot of experience with policies and application requirements, so we looked at ways we could improve the park and what that would involve. “ The Murphy siblings and their father, Lawrence, chose to develop a project to reconnect the rail route into a single, continuous trail for residents and visitors.

The trio formed a local charity called Friends of Bermuda Railway Trail and raised capital for the project from local private investors. In 2013, the group got their feet wet with their first project: Bailey’s Bay. It entailed a total of 13 bridges including a series [of spans] that crossed Bailey’s Bay and reconnected two trail sections.

“We wanted a durable, lightweight bridge that could withstand a harsh environment,” says Tucker Murphy. “We found the E.T. Techtonics pultruded fiber reinforced polymer (FRP) bridge and walkway products online. My dad travelled to the States to take a look at the technology and thought it would work well for our application in Bermuda.”

Just two weeks after the majority of the bridges were installed at Bailey’s Bay, the island was hit with back-to-back hurricanes. Wind speeds were clocked at up to 144 mph. “The island sustained a lot of damage, but the bridges came through completely intact,” says Eric Johansen. “With projects like this one, it’s all about testing [whether in the lab, or in the field], but you can’t simulate something like this. Those tropical cyclones proved that the product worked under hurricane conditions.” The island and the Bailey’s Bay FRP bridges have since endured four more hurricanes.

In 2017, Friends of Bermuda Railway Trail launched a second major bridge project to reconnect the trail across Flatts Inlet. Tucked between the parishes of Hamilton and Smiths, the inlet joins Harrington Sound with the Atlantic Ocean. A 40-ft.-high trestle with steep grades on either side originally carried the train across Flatts Inlet. Piers, designed to support the track, were built on concrete pylons. Two groups of four pylons from the original trestle remained in the inlet.

“Maintenance is a huge issue for us due to the harsh, salty environment. We also have a limited workforce because we’re a small island. FRP met our goals for a reduced environmental footprint and the truss design fit the historical narrative we wanted to preserve.”

After advising the Murphys about the project’s feasibility, Johansen prepared a preliminary design and computer model simulation of how the bridge would perform to help provide a cost estimate. “Nothing like this had ever been done before,” Johansen adds.

With a lot of moving parts in play, Laura Murphy spearheaded getting plans approved for the Flatts Inlet. It meant presenting the concept to the ministers of environment and public works as well as the then Premier, the Hon. Michael Dunkley, JP, MP. “We got a good response and were given the go ahead to submit the concept to the rest of the cabinet,” she says. After gaining a political consensus, Laura Murphy tackled consults with seven different government departments and sections, as well as special stakeholder groups.

“We had to meet with the tour boat operators to determine how high the bridge needed to be,” she says. “We also had to consider special circumstances such as the fact that the bridge site was in a cave protection zone. An extensive cave system is located near the building site. You can’t actually go in and explore these caves but it meant we couldn’t excavate very deep without first drilling additional exploratory boreholes. That’s one of the reasons we chose to install the FRP bridges on the existing railway pylons, where possible.”

FRP met the requirements of the Marine Resources Board as well. Spans were lightweight enough to rest on the existing pylons in the Inlet reducing the need for extensive construction in a sensitive marine environment. Flatts Inlet is teeming with coral and sea life from spotted eagle rays and tarpon to the occasional hammerhead shark. Its design flexibility also suited the narrow work spaces on the Railway Trail, as bridges could be assembled off-site, and bridge lengths could be easily adjusted to avoid siting new pylon foundations too close to the three utility lines running under the surface of the trail. “We held a public meeting and then submitted our application to the Department of Planning along with a marine traffic study and conservation management plan,” Laura Murphy says. “The cost for labor and services is very high in Bermuda, so anything that we could do ourselves, we did, in order to keep project costs low.”

Once plans were approved, CCG was tasked with designing and fabricating the longest clear span pultruded FRP truss bridge in the world. Plans specified a clear span bridge 152 ft. long and 8 ft. wide. Prior to the Flatts Inlet installation, E. T. Techtonics had only produced spans up to 115 ft. long with a double truss system above and below the deck.

“We had some challenges,” says Dustin Troutman, director of marketing and product development for CCG. “It took us a couple of months to design the bridge to international building codes, but we constructed it stateside in about two weeks.”

A continuous manufacturing process, pultrusion creates high-strength, lightweight FRP structural profiles such as angles, c-channels and I-beams. Fiberglass reinforcements in the form of roving and mats are saturated with resin and channeled into a heated die. The profile exits the die in the form of the desired cross section or shape. Pultruded profiles have a higher tensile strength than conventional steel yet are approximately 80 percent lighter.

Pultruded profiles provide a lower carbon footprint than steel and aluminum, and because the material is inert, chemicals are not leached into the environment. To build the truss bridge, pultruded pieces were cut, drilled and bolted together.

“Testing took two days,”says Troutman. “One day for a lift test with a crane and one day for a load bearing test. Since the job site was in the middle of the water, building the bridge in situ was not an option. We had to make sure the crane [and barge] at the Bermuda job site could effectively pick up the entire bridge span based on the specified rigging and pick plan.”

“The load test was the largest pedestrian bridge test ever performed,” says Johansen. “You don’t typically build a structure to full scale and then load test it. Creative Pultrusions did an excellent job orchestrating the logistics.” Wooden holding tanks were filled with water and uniformly placed along the bridge deck surface to simulate the bridge filled to capacity with people. Approximately one hundred thousand pounds of water simulated 500 pedestrians on the bridge. Test results were close to a pedestrian load of 75 lbs. per sq. ft., exceeding design requirements specifying 65 lbs. per sq. ft.

Once safety and performance parameters were verified, the bridge was disassembled, packaged, kitted into three 40-ft. storage containers and shipped to Bermuda. Friends of Bermuda Railway Trail assembled a small crew of dedicated volunteers. Families, retirees, trail walkers, local engineers/architects, and even one sailor stranded in Bermuda by the pandemic, met the container, unpacked it and re-assembled the bridge in a manner “as straight forward as that of an Erector Set.”

“It demonstrates how easy it can be to assemble composites due to their lightweight nature,” says Johansen. “Ease of assembly can also translate to huge cost savings.”

The 152-ft.-long bridge was assembled in the fall of 2020 at the island’s historic Dockyard—the site of the 2017 America’s Cup village. On December 13, 2020, [following pre-approved rigging instructions], the span was loaded onto a barge with a large crane. The span was ferried to the installation site December 14, 2020, where it was lifted with the barge crane onto the remediated concrete pylons. The clear span is the first of several bridges that will be installed to reconnect the trail across Flatts Inlet. Friends of Bermuda Railway Trail received its building permit in June 2021 to dig foundations and construct the next pylons. The organization expects to assemble and install the next FRP spans this summer.

Installed by Friends of Bermuda (Owner)