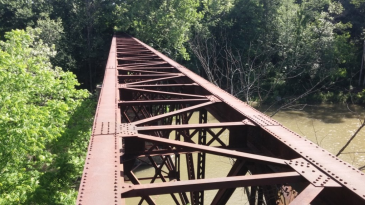 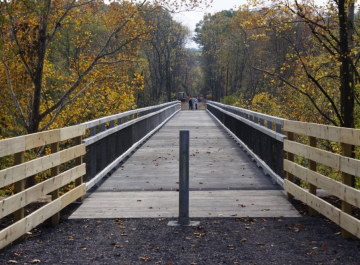 The Huntingdon and Broad Top Mountain Railroad and Coal Co., Rockhill, Pennyslvania, was established in 1853 to provide a short line rail link from Huntington to Bedford to give local coal producers a competitive alternate route. At the height of its operation the rail trail stretched 72 miles and included a trestle bridge built in the 1860s to carry the train over the Juniata River. Rails-to-Trails Conservancy is repurposing these unused rail corridors to support a growing nation-wide network of recreational trails. Broadtop Township chose Composite Advantage’s prefabricated FRP FiberSPAN bridge deck product to renovate the H&BT Rail Trail trestle bridge. The bridge is part of a 4-mile span of public trail that connects Hopewell Borough and Tatesville and intersects with Riddlesburg and Cooper public parks.

From Concept To Completion—Profile Of An FRP Bridge 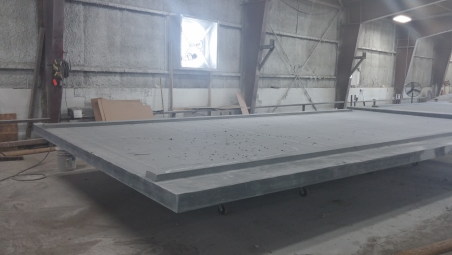 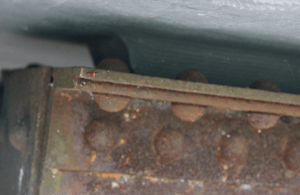 Unlike conventional bridge decks, old structures like the H&BT trestle bridge used girder flanges with rivet heads on top. To properly seat the new FRP deck, the design flexibility of FiberSPAN technology allowed a spacer—required to ensure the deck cleared the rivet heads—to be molded as part of the deck.

From left to right—Prefabricated FRP deck panels are a full transverse bridge width of 13 ft. Because the bridge spans a gorge, the deck could not be connected to the girders from underneath. A Broadtop Township construction crew bolted down FRP deck panels to threaded shear studs welded to the tops of the girders. Connection holes were filled with foam and sealed with a cap. Installation of 15 FRP deck panels took just three days. Other construction activity required to complete the entire bridge structure took three weeks. 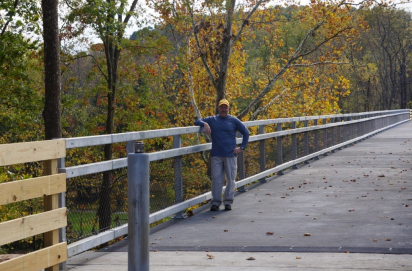 The new FRP deck sports a gray color selected to compliment its natural surroundings as well as a non-slip wear surface. Railing posts bolt to steel box tubing embedded in the deck. The steel is integrally molded with FRP to provide a highstrength load path. Railing consists of horizontal steel box tubing and safety fencing. The bridge and trail segment were opened to the public in November 2014. The new FRP bridge is 350 feet long by 13 feet wide.