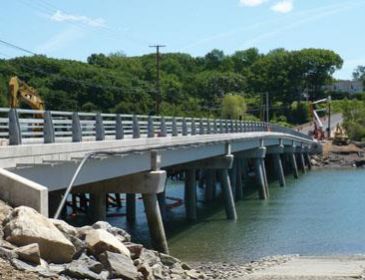 Reportedly the largest composite vehicular bridge in the world, the 32-ft/9.75m wide, 540-ft/165.6m long Knickerbocker Bridge opened to traffic in Boothbay, Maine, on June 11. Originally a 38-span timber bridge, the two-lane highway bridge has only 4 ft/1.2m of water clearance at high tide in the harsh marine environment. A composite solution, in the form of hybrid composite beams (HCBs) manufactured by Harbor Technologies (Brunswick, Maine), was selected by the Maine Department of Transportation (Maine DoT). The HCBs were developed by HC Bridge Co. LLC (Wilmette, Ill.), a specialist in hybrid-composite structural alternatives that have been highlighted previously in CT. The lightweight beams are made with fiber-reinforced polymer, combined with concrete and steel, at a cost comparable to the traditional bridge materials, and they made it possible for the structure to bridge the 540-ft of water with just eight spans. According to John Hillman, HC Bridge president, the hybrid-composite beams also have been used on bridges in New Jersey and Illinois and on a Class 1 railroad bridge built for BNSF Railway Co. (Ft. Worth, Texas).

Hillman says that Maine DoT decided to move forward with the hybrid composite beams for this project after testing the technology at the University of Maine. He noted that, in an effort to improve the quality of new bridges in the state and to help foster economic development by growing Maine’s composites manufacturing base, a composites initiative was made part of a public law, effective Sept. 1, 2008. The law has served to advance the development of composite bridges and created the funding mechanism for the Knickerbocker Bridge. As part of the initiative, roughly $11 million was provided for bridge construction projects, which include composite components.

For this project, the preliminary design report recommended that the existing wood bridge be replaced by precast box beams. However, use of the beams, which were too heavy to be supported by the existing bridge during construction, would have necessitated a large barge and crane. Eric T. Calderwood, chief engineer at Calderwood Engineering (Richmond, Maine), noted that corrosion and long-term durability were key factors in the design phase because the structure sits close to saltwater and can experience wave action. These factors made HCB attractive as a design solution.

Says Calderwood, “In this case, we had a full-size beam made up at the University of Maine’s Advanced Structures and Composites Center [AEWC, Orono, Maine] with the arch filled and the deck cast on it, as it would be in the field. This beam was then fully instrumented and tested for fatigue considerations, and then, once fatigue was fully satisfied, it was tested to destruction,” he notes. “The beam had approximately four times the capacity required.”

Construction began in the spring of 2010 with the installation of concrete-filled pipe piles with rock anchors tensioned into bedrock. In the fall of 2010, prior to completing the substructure construction, the general contractor began erection of the HCB units. The contractor was able to ship the HCB beams across the existing timber bridge, even with the posted load restrictions, and the construction proceeded at an average rate of eight beams per day. It was possible to fill each beam with concrete in approximately 20 minutes. Further, the reduced shipping and installation costs associated with the composite structures made the solution cost-competitive with the conventional precast box beams on a first-cost basis. Kim Suhr, VP of general contractor Wyman & Simpson (Richmond, Maine), says, “Each of the 70-ft [21.3m] long beams for the Knickerbocker Bridge weighed only 5,000 lb [2,268 kg].” As a result, four HCBs could be shipped on a single truck instead of the one truck per beam that would have been required for precast concrete beams. “Further, we were able to erect the beams using a small crane instead of mobilizing a 200-ton crane,” he adds. “This resulted in a significant cost savings.”

Suhr also cites a long-term benefit of HCB: its anticorrosive properties. “I am confident that this bridge will have a longer life span in this corrosive saltwater environment than if it was constructed of simply steel or concrete,” he said. “We definitely will use HCB again.” Nate Benoit, project manager of the Maine DoT Bridge Program, concurred, noting that they are already quoting some other projects using HCB.