Fiber Reinforced Polymer (FRP) materials are the best choice for long lasting and nomaintenance panel for bridge decks and rail station platform. FiberSPAN panels were installed at a Metra station southwest of Chicago in 2009. Composite Advantage recently inspected the platform panels to track performance and look for any potential improvements that could be beneficial in future projects. With the high strength of fiberglass and high safety factors of the FRP panels, the structural performance is great. The bolts and clips connecting the deck to the steel beams were tight. Handrail attachments to the back side of the deck were solid. The other desire of owners is minimal maintenance costs. Most of the inspection focused on the exterior of the panels. This is the part of the platform that owners and uses see and interact with. The non-slip wear surface is covers a majority of the surface and handles foot traffic and occasional snow removal equipment. The wear surface is not worn down anywhere. The wear surface does not show chipping or breaking at panel edges. Color from one panel to the next is consistent. The tactile warning tiles remain well bonded to the FRP. Panel to panel joints are filled with an expanding foam seal. There were a few locations where the seal is lower than the panel top and pebbles fall in these gaps. 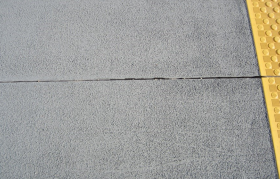 Besides the platform technical details in the sidebar, other interesting aspects include design and installation items. A light weight deck was selected to minimize the soil and substructure work since the platform was adjacent to wetlands. Installation of 67 panels was accomplished in just three days in freezing temperatures in December. And this was while having to interrupt work whenever a train came through the station. The contractor efficiently installed the panels with a team of only four persons; one of which operated the light duty excavator that is the only equipment needed to erect the light weight panels.

Composite Advantage uses non-slip wear surface on the top surface on its pedestrian bridges, rail platforms, construction mats and crane outrigger pads. It is a version of the wear surface used on aircraft carrier decks. The non-slip surface is also used on steel ship decks, industrial warehouses floors, stairs and livestock trailers/ramps. The texture (roughness) can be varied to customer preference. The wear surface can be pigmented to any color.

After structural performance, the next most questions that CA receives are about the wear surface. The coating is an epoxy with alum oxide aggregate. The coefficient of friction when wet is 1.0; and the ADA minimum requirement is 0.6.

For the wear surface only, its longest usage has been approximately 20 years when it was introduced. It has been used in very demanding applications for that long. Many are in marine and salt water environments such as Navy carrier decks and the decks of maintenance ships. The wear surface has been used for 20 years at Penn Station in New York City.

There are multiple commercial suppliers of the nonslip coating so owners are not tied to a proprietary product if touch-up repair is required.

The oldest FRP deck with non-slip wear surface was installed in 1998. It is on a bicycle path in Xenia, Ohio with snow, ice and cold. Composite Advantage monitors this wear surface so we can provide our customers with the best available information on life time performance. 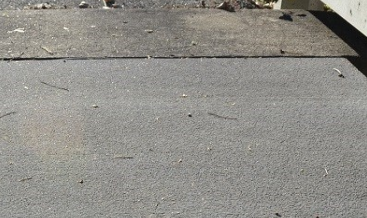 The wear surface has held up well without any damage or repair needed after 15 years. The bridge in the Greene County Bicycle Trails system was one of the first FRP bridges in the world. It was built as an early demonstration of FRP for bridges. It was assembled from pultruded sections and coated with the non-slip wear surface. When CA started supplying bridge decks, we selected this wear surface since it had a track record that our families and friends walk on and ride on.