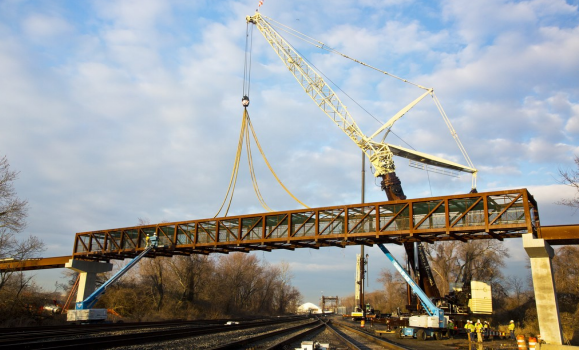 The Anacostia Riverwalk Trails run along both sides of the Anacostia River in Washington, DC. Two pedestrian bridges span railroad tracks to connect the trails in the park area. The Sshape curves of the bridges offer a graceful solution that effectively accommodates the trail's changing layout while minimizing span length over the railroad tracks. At the end of May 2013, the District Department of Transportation signed off on the East bicycle bridge for the Anacostia Riverwalk Trails. The last structural items were the installation of the truss span over the CSX railroad tracks and the accompanying FRP deck panels. The new span allows cyclists to take advantage of a longer stretch of East trails previously interrupted by a set of railroad tracks. The new bridge section brings D.C.'s total of completed Anacostia bike trails to 12 miles.

The East bridge measures 1,185 feet long and it is one of the longest of its kind in the United States. The first Anacostia Riverwalk bridge is 685 feet long; crosses the CSX tracks west of the Anacostia River; and was opened in April 2012.

The deck design for the Anacostia bridges took advantage of the flexibility of FiberSPAN FRP decking. The standard deck panel for the bridges was 16.25 feet wide and 8.3 feet long. The panel covered the full transverse width of the deck. The length allowed for transportation without permits and provided an easy size to install. The contractor often used a small boom lift. Approximately half the panels were rectangular; while the other half were trapezoidal to create the double-curved deck. The deck panels for the enclosed truss span were one foot narrower. The girder and deck layout had section breaks where the curvature changed. At these locations, partial panels at various lengths were used to fit with the geometric break and account for construction tolerances for these long bridges. After the standard panels were installed, the smaller partial panel openings were surveyed. CA quickly manufactured the partial panels to fit and the panels were dropped in place.

The Anacostia deck panels had many bridge details included in the prefabricated product. These were curbs, drainage scuppers, electrical junction boxes, expansion joints and attachment points for conduit hangars. Building these details in the shop reduces construction time on the job site and supports the FHWA’s initiative for Accelerated Bridge Construction 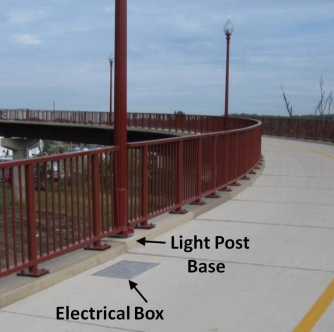