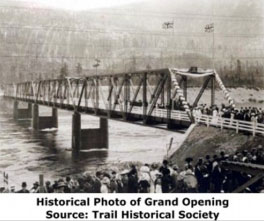 Called the great river of the West, the Columbia waterway is more than 1,200 miles in length, making it the fourth largest river by volume in North America. The “lifeblood of the Pacific Northwest” extends from the Canadian Rockies in British Columbia to the Pacific Ocean near Astoria, Oregon.

Bridges have long served as critical links, taking over when geography stops the progress of highways, roads and trails. Such was the case when the discovery of gold and copper ore in 1890 gave birth to British Columbia’s City of Trail. The Province erected Old Trail Bridge in 1911 to connect the community growing up on the Columbia River’s banks. The early example of a rivetconnected, multi-span truss bridge became a historical and technologically significant landmark that served Trail for a century until deterioration forced the Regional District of Kootenay Boundary (RDKB) to close the structure.

In December 2016, a new landmark emerged in the form of a 300m span bridge deck prefabricated from advanced Fiber Reinforced Polymer composite material. Combining function with beauty, the $15 million project allowed RDKB to reroute a new sewer pipe bridge, add other utilities and construct a new pedestrian bridge with
FiberSPAN. The integrated composite bridge system gives the community a  lightweight, zero-maintenance structure that once again connects east and west. “Trail Community in Bloom” spokesperson Dan Rodlie deemed the new structure another jewel for the community. FiberSPAN guarantees the city will carry the bridge’s story forward for at least another 100 years.

The designer of the Columbia River Skywalk, COWI of Vancouver, took advantage of
the design features available in FiberSPAN decking. They created a double duty bridge while accounting for the construction challenges of the location. Lightweight decking was critical to turning a utility bridge into a signature bridge that re-connects the community. Prefabricated decking made construction simpler.

FiberSPAN decking has a wide range of available design features and the Columbia River Skywalk incorporates most of these features. There is a crown in the middle of the panel; curbs including attachment points for railing posts; drainage scuppers; insets on the bottom to clear girder splices; and a non -slip overlay. There are multiple panel sizes: wide approaches, cutouts for walkways on both sides of the steel masts, and transition panels to the main span width. More details on these features are found in the Composite Advantage Fall 2016 newsletter.

Construction in a mountain gorge over the powerful current of the Columbia River is a challenge. The lightweight, prefabricated attributes of FiberSPAN decking became important. The contractor, Graham, created a carriage suspended from the bridge cables to move bridge elements over the river. After erecting the girder sections, the carriage placed the decking around the masts and the approaches. Then, a light-duty telehandler could drive the main span panels into position going from one end to the other. 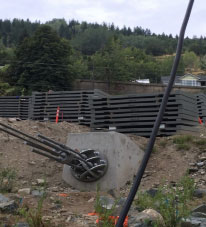 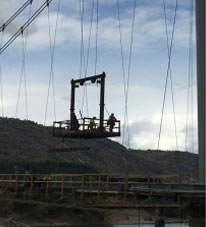