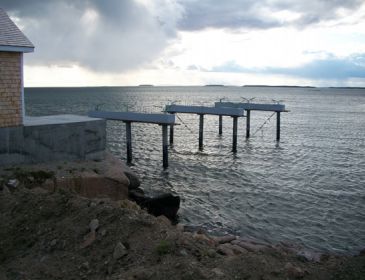 Harbor Technologies has supplied the Down East Institute (DEI), Beals Island Maine, the first pier made entirely of composites.

DEI, home to Maine's first public shellfish hatchery, is a growing institution offering marine research and education resources for coastal Maine. According to Harbor, DEI needed to replace their old wooden pier and so contracted them to build the components for an environmentally sound structure for DEI's Beals Island research station. DEI contracted Kleinschmidt Engineering in Pittsfield Maine to engineer the H-20 rated project designed to handle a 30,000lb load. DeLong Marine Services out of Brewer Maine was brought on for the installation. The new pier comes in at 100' long and 30' wide and, according to Harbor, it is comprised of an entirely composite waterfront system consisting of piles, pile caps, decks and floats. This installation is now complete with an official ribbon cutting ceremony taking place this summer, 2012. Dr. Brian Beal, a professor of marine ecology at the University of Maine Machias and a researcher at the Downeast Institute, stated "It (the new pier) is a wonderful, new addition! It will become a centerpiece for DEI in the future."

Harbor says they had been working on a pier solution for the marine waterfront for some time and this project was a perfect application. The Beals pier will be subject to heavy truck loads thus making the Hybrid Composite Beams (HCB) an ideal solution. Harbor manufactures the HCB, which is purposed as a bridge beam, to carry heavy loads over a long open span. The 100' long pier needed only three bents (a transverse framework) with a total of 9 pilings for support. Not only does the pier need to be able to sustain heavy loads, but it also needs to be stable enough to sustain severe environmental forces. The DEI facility is located in a very exposed and hostile environment where the structure will be subject to heavy seas and ice flows. This structure is expected to last at least 100 years with minimal maintenance.

Mike DeLong, of DeLong Marine Services, hopes that the composite pier is the thing of the future. As a smaller contractor, the use of light weight composites allows him to compete with larger companies that have larger equipment that are able to manoeuvre the heavy loads of pre-stressed concrete. With the use of smaller equipment and lighter materials Mike estimates that the build time of an all composite pier is roughly half of the time it would take to build an equal structure out of traditional materials. The installation cost is a bit pricier than a wooden pier, comes close to that of a pre-stressed concrete, but will likely be the last one ever needed to be built. "The composite pier is hopefully a thing of the future; it is a non-corrosive, longer lasting, superior pier." said DeLong.

"I will say that we are pleased to have a rock-solid pier that will function in a variety of ways. First, it will enable us to access the waters of the Western Bay, and it will allow those wishing to use DEI's research and other resources from the water for the first time since 2006. Second, it provides a means for us to obtain clean seawater not affected by pressure treated timber, to use in our shellfish production center, our marine education center, and for our marine research projects. Third, the new docks will allow us to access small boats and as a research platform for a variety of small ecology projects. The pier is an amazing structure that is constructed out of composite materials manufactured right here in Maine and can be a model for others in the state who are thinking about similar applications," concluded Dr. Brian Beal.