Composite Advantage is introducing a new wear service option for its FiberSPAN pedestrian bridge deck and rail platform products. A polymer concrete similar to that used on vehicle bridges, Matacryl combines quartz aggregate in a methylmethacrylate polymer for greater durability, less roughness and higher elongation than the traditional non-slip wear surface CA has used for the last 10 years.

The quartz aggregate comes in a variety of colors and is highly resistive to UV radiation and subsequent fading. The Matacryl system is has been used in Europe for many years and was just recently introduced in North America.

FRP decking continues to gain ground in pedestrian bridge and rail platform projects—particularly in larger cities where these structures are subjected daily to the foot traffic generated by thousands of people. Many of these areas are also located in the northern part of the country where snow removal is required to clear platforms and walkways. These demanding requirements first prompted adaptation of the Matacryl technology to these applications. The wear surface is approximately 1/4-inch thick compared to traditional wear surfaces that is one-tenth of an inch thick.

The Matacryl wear surface has been UL tested for fire resistance. If an extreme event damages the surface, it can be easily repaired with polymer and quartz aggregate in the form of a patch. The product weighs two pounds per square foot and costs a few dollars more per square foot than the traditional wear product. High elongation equips the surface to withstand impacts at cold temperatures.

The Matacryl system has greater than 100 percent elongation with an extremely high adhesion to the FRP substrate (>500 psi). Typical polyester and epoxy-based systems have a maximum of 30 percent elongation and lower adhesion to FRP. In addition to the new product, CA will continue to offer its traditional surface for applications that don’t have a high traffic count, such as trail and park bridges. 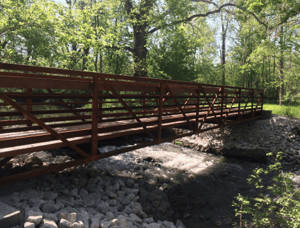 For the first time in three years, residents of Beavercreek, Ohio can hike or stroll through Rotary Park, Phillips Park and the Beaver Creek Wetlands Nature Preserve thanks to a new FRP bridge.

The original bridge was pieced together in the 1990s by Greene County park employees from used county highway bridge materials. Flooding and subsequent erosion eventually prompted Beavercreek Township to close the crossing.

In September 2014 the Township found a total bridge system solution in its own backyard. Composite Advantage was hired to design and build a nomaintenance structure for the Township under the management of Trail-Works.

CA designed the bridge deck to support pedestrian loads [85 psf] and maintenance vehicle loads and withstand uplift force in the event of a 100-year-flood. The design also called for a weathered steel truss superstructure to comply with the zero maintenance requirement. Surface oxidation seals the steel eliminating the need to paint. The design was approved by the County Floodplain Administrator. 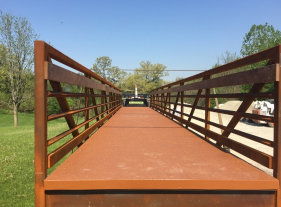 CA’s partner, FRP Constructors, handled the installation. The prefabricated bridge with decking was transported to the park and set in place. Installation took less than a day.

Approximately a month after installation, unexpected storms caused flooding. An uprooted tree crashed into the bridge when a section of the bank gave way. Inspection revealed that abutments remained solid. The bridge deck and connections were sound; demonstrating the FRP design’s high-performance characteristics.

CA and FRP Constructors provided the Township with a turnkey system that included design, demolition of the old structure, new abutments, bridge deck, installation and trail approach finishing work. The lightweight FRP deck will last 75 to 100 years giving generations of visitors and residents access to the three parks