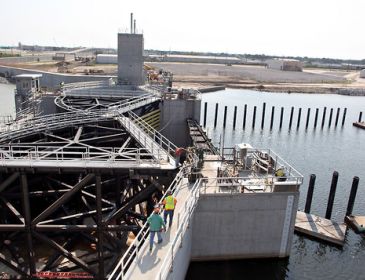 NEW ORLEANS — Finally, there is a wall around this city.

Nearly seven years after flood waters from Hurricane Katrina gushed over New Orleans, $14.5 billion worth of civil works designed to block such surges is now in place — a 133-mile chain of levees, flood walls, gates and pumps too vast to take in at once, except perhaps from space.

Individual components of the system can be appreciated from a less celestial elevation. At the new Seabrook floodgate complex, climb up three steep ladders, open a trap door, and step out into the blazing sunlight atop a 54-foot tower that was not here just two years ago. From there one looks out over a $165 million barrier across the shipping canal that links Lake Pontchartrain, the Mississippi River and the Gulf Intracoastal Waterway.

Two “lift gates,” 50 feet across, can be lowered to block the waters of Lake Pontchartrain. A navigation gate 95 feet wide, whose curved sides weigh 220 tons apiece, can be swung gently but mightily into place. When open — which will be most of the time — the gates will allow easy boat traffic.

When a storm threatens, however, they will seal off the canal from the kind of surge that devastated the Lower Ninth Ward in Katrina.

Yet all that seems puny in comparison to the two-mile “Great Wall” that can seal off the channel from Lake Borgne to the east, or the billion-dollar west closure complex, which features the biggest pumping station on the planet.

Now, hurricane season has returned, as it does each June. Whatever storms might approach New Orleans this year or in the future, they will encounter a vastly upgraded ring of protection. The question is whether it will be enough.

When Katrina hit New Orleans in 2005, the city’s hurricane protection system became a symbol of America’s haphazard approach to critical infrastructure. The patchwork of walls and levees built over the course of 40 years was still far from complete when the storm came, and even the Army Corps of Engineers admitted that this was “a system in name only.” Flood walls collapsed, and earthen levees built from sandy, dredged soils melted away.

What has emerged since could come to symbolize the opposite: a vast civil works project that gives every appearance of strength and permanence. No other American city has anything like it. “This is the best system the greater New Orleans area has ever had,” said Col. Edward R. Fleming, the commander of the New Orleans district of the corps.

Marc Walraven, a district head in the Dutch ministry of transport, public works and water management, recently toured the defenses. While 100 percent safety is impossible, he said, and challenges in operations and maintenance can be expected as the corps passes the facilities over to local management in the coming year, “the constructions that have been built are in my opinion adequate to defend New Orleans.”

Tim Doody, the president of the levee board that oversees Orleans and St. Bernard Parishes, disagrees. While the construction appears to be strong, he said, the level of protection authorized by Congress for the corps to build is “woefully inadequate.”

The new system was designed and constructed to provide what is informally known as 100-year protection, which means it was built to prevent the kind of flooding that has a 1 percent chance of occurring in any given year. That standard is used by the Federal Emergency Management Agency to determine whether homeowners and businesses must buy flood insurance to qualify for federally regulated or insured mortgages.

But New Orleans has seen storms far more damaging than the 100-year standard. Katrina is generally considered to have been a 400-year storm, and rising seas and more numerous hurricanes predicted in many climate-change models suggest harsher conditions to come.

“It’s what the country will pay for; it’s what FEMA insures for,” Mr. Doody said. “But our thought and belief is that we all need to be behind protection that’s greater than that.”

Still, corps officials insist, the new system has been designed with far greater strength and resiliency than anything that went before it. While a major storm could lead to street flooding — something New Orleans, much of which is below sea level, sees even with heavy rainfall — the kind of catastrophic, explosive wall of water resulting from the failure of sections of flood wall and the dissolution of poorly-built levees that devastated so much of the city after Katrina should not occur again, they say.

Moreover, newly storm-proofed pumps can drain off the flooding with relative speed. Colonel Fleming said he believed that the armoring built in means “the system will be resilient up to the 500-year storm.”

As for the often contentious relationship between the corps and community groups like the levee boards, the rising network of protective structures is helping to calm tensions, Colonel Fleming said. “I don’t want to portray this that we’re sitting around singing ‘Kumbaya,’ ” he said, “but we’re not yelling and screaming.”

Overall construction started in 2006, and while some work is still going on, the projects are substantially complete and functional for this hurricane season.

Even many in the corps seem astonished by the speed of the work; projects of this magnitude would normally take decades to construct, said Kevin G. Wagner, a senior project manager with the agency. Looking out toward the billion-dollar pumping station and gates at the west closure complex, he said, “It’s truly amazing, starting in 2009, to be where we are today.”

To speed up the process, the corps used a streamlined process for getting environmental permits and urged contractors to work their projects in parallel — for example, beginning construction on the foundations of some structures before the final designs for the walls, gates and buildings were complete.

More important, Congress voted the $14.5 billion —nearly three times the annual civil works budget for the agency — up front instead of the usual incremental dribbling out of appropriations. “Full funding of the program gave us lots of flexibility,” said Michael F. Park, the chief of Task Force Hope, the special corps entity created to oversee the projects.

Mr. Wagner, who lost his home as did other family members in Katrina, said with chagrin, “It feels terrible to say, but it takes a disaster to get that kind of funding.”

Building greater than 100-year protection might not be simply a matter of building walls ever higher. It will also come from restoring the coastal environment that slows and buffers storms and their surge. It means restoring wetlands that have been rapidly disappearing, and perhaps creating barrier islands to act as speed bumps for storms.

But Katrina did not just leave a soaked and despoiled city; it left a residue of mistrust of the corps. When asked whether he thought the new hurricane structures would be effective, Jasen Seymour, a 19-year-old who was bowfishing with a friend near the 17th Street Canal, said “If the Army Corps of Engineers has anything to do with it, it’s not going to be strong.”

Still, some residents demonstrate their faith in the future simply by not leaving. Artie Folse, who rebuilt his home after Katrina and lives just a few blocks from the site of the breach of the 17th Street Canal that inundated his Lakeview neighborhood, said: “The fact of the matter is, I still live here. That pretty much says it all.”