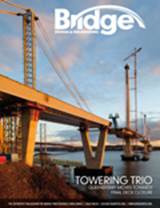 Nearly every major bridge design these days includes a shared-use path for walkers and cyclists. But the growing volume of commuters has also created challenges for bridge owners with existing structures. More foot traffic dictates shared spaces with requirements for clear widths up to 4.6m. The impact of this on loading has prompted owners and engineers to seek alternatives to conventional materials like concrete. A number of communities have begun adopting fibre-reinforced polymer systems for cantilever footpaths, first used on the Art Deco Tower Bridge in Sacramento, California almost a decade ago.

Fiberspan deck panels which are produced by Composite Advantage weigh between 0.2kN/m2 and 0.4kN/m2, an 80% weight saving when compared to reinforced concrete decking. The entire system consisting of stringers, deck and railing can weigh as little as 0.6kN/m2. The support is typically gussets that act as floor beams at diaphragms or trusses or extension at piers providing for a mini superstructure. Railing attaches directly to the FRP decking. Components are prefabricated for accelerated construction and lower installation costs. Functional features like a cross-slope, non-slip wear surface, drainage scuppers, grating, curbs, light posts supports and electrical boxes are added during shop fabrication. Lower life cycle costs and zero maintenance make the system attractive.

“A lot of bridges are good candidates for an FRP cantilever,” notes Reeve. “Structures with small concrete footways are typically attached with supports to the exterior girders or trusses. That makes it easier to calculate whether or not the bridge has the structural capacity to handle the increased live load. On a wider FRP footpath with little dead load, the combined load may actually be less on a vehicle bridge than the original concrete footpath dead load plus narrow width live load. Basically, you can minimize dead load with FRP, build a wider footpath and accommodate more people.”

The Wilson-Burt Bridge in Niagara County, New York, has benefitted from this technology. This 135m-long bridge over Eighteen Mile Creek was flagged as unsafe in 2008 by the Department of Transportation. As an interim measure, the county spent US$400,000 on repairing a broken pier and the bridge was closed again in 2014 for a total rehabilitation project with a budget of US$4.2 million, including a new, wider footway.

“The footpath was old; crumbling from wear and tear and it was too narrow to support modern traffic requirements,” says Reeve. “Our lightweight Fiberspan product made it possible for designers to increase clear footpath width to 1.7m and maintain a combined load less than the original weight.”

The cantilever footway was designed to support a live load of 4kN/m2 while minimising deflections to less than 6mm, and handling a temperature differential of 38°C. Twenty prefabricated footway panels were delivered for installation on floor beams. For the increased width, W8 beams were bolted on top of the original, short beams extending perpendicular from the exterior girders. The footway panels were manufactured with a 1.76% cross-slope top surface for water drainage; an easier and more cost-effective approach than sloping support beams or installing shims. The 6.7m-long panels have a shop-applied non-slip surface. Steel connection points were embedded in the deck to attach the railing directly to the footway panels and internal steel members provide the right material for concentrated loads. The new 1.7m-wide, 135m-long cantilever footpath was reopened at the end of last year.

There are situations where adding a cantilever footway may not be appropriate. Owners considering it will first need to look at the structure’s original calculations to determine if the bridge has the capacity to handle additional live load. A bridge inspection may also be required to evaluate condition and verify strength calculations. If the footway is to be assembled on one side of a movable bridge, engineers also have to consider the effects of torsion. An extreme example might be a movable bridge in an urban area where full live load is reached during special events. There may be limits to how much increased live load a suspended bridge component can handle.

“If there is no existing footpath, the required additional live load may also limit its width,” Reeve says. “For example, a 4.6m-wide shared space may be desired but load safety factors won’t allow. Without an existing footpath, a new support structure must be attached to the exterior girders or trusses. Connecting to steel girders is simpler than connecting to concrete girders.”

“For bridge owners it really comes down to this,” explains Reeve. “If a bridge doesn’t have a footway or can’t take the additional load, it may be more cost-effective to construct a new pedestrian bridge. However, if the pedestrian crossing is longer than 61m, and the bridge will need additional piers in the water to support the span, this can become very expensive. What we’re finding in the field is that the majority of bridges can accommodate a lightweight cantilever sidewalk."