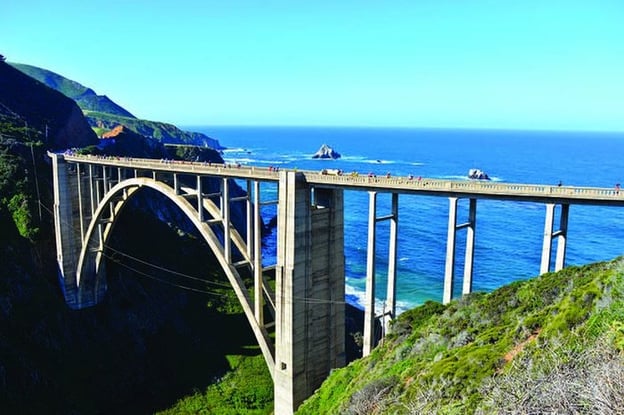 As a Fiberglass Reinforced Polymer bridge and bridge deck fabricator, I’m always interested in taking a look at the work of others when travel takes me to an interesting location like California’s Big Sur. The 90-mile stretch of coastline is made up of bluffs, sea and broad expanses of sky. It’s also home to the Bixby Creek Bridge, a structure most feel is one of the most photographed bridges in California.  Locals and history buffs call it Big Sur’s version of the Golden Gate Bridge.  During this trip, Bixby Creek Bridge was on our travel itinerary.

A frequent subject of Instagram, the 85-year-old span has made appearances in movies like “Play Misty For Me” and “Then Came Bronson.” It’s been the muse of rock bands and writers. It even has its own postage stamp.  The iconic landmark is 120 miles south of San Francisco and 13 miles south of Carmel in Monterey County along State Route 1. It’s hard to imagine what it must have been like for residents before the bridge was built in 1932. History tells a story of people who were cut off during the winter due to the impassable Old Coast Road that traveled 11 miles inland.

The Old Coast Road was built by businessman Charles Henry Bixby, who migrated to the area from New York and made a living on the land, harvesting its timber and mining its natural lime deposits. Bixby extended Old Coast Road to his ranch to get his products to market faster. However, the 30-mile journey could still take three days by wagon or stagecoach. The only other way for coastal residents to receive supplies was a hazardous landing by boat.

By 1906, homes were springing up in the area. The state began building Route 56 in 1919, necessitating the construction of a number of bridges, the largest of which was the crossing over Bixby Creek. State engineers chose the coast route for the Bixby Creek Bridge over tunneling through the Santa Lucia Mountains. Very similar to the way we evaluate bridge requirements today, California state highway engineer C. H. Purcell and bridge engineer and designer F. W. Panhorst considered the impact of sea air on a steel structure and the subsequent cost of regular maintenance and repainting. Aesthetics were also important as the material used needed to compliment the site’s natural surroundings. Concrete was chosen for its ability to meet cosmetic requirements and reduce construction and maintenance costs.

Low bidder Ward Engineering began construction in August 1931. More than 300,000 board feet of Douglas fir timber comprised a 250-ft. high falsework designed to support the bridge’s arch during construction.  Crews excavated 4,700 cubic yards of earth and rock to ready the site for 6600 cubic yards of cement. The concrete was then transported across the canyon on platforms using slings suspended from cables 300 ft. above the creek.

In 1998, Bixby Creek Bridge underwent a $20 million seismic retrofit. Costs were high due to the need to preserve the structure’s historical look. The project was also challenged with severe load factors, limited physical access and the need to keep one lane open throughout the process.

Besides the obvious appreciation for the area’s impressive views, it's helpful to understand the decisions that went into creating the bridges that have stood the test of time. That knowledge can be used for today’s long-lasting, community supporting structures.