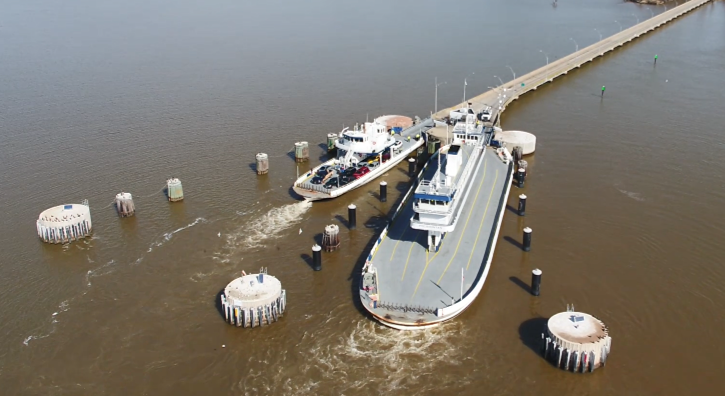 On February 26, 1925, Albert Jester made the first automobile ferry crossing of the James River [Virginia] with the Captain John Smith. The boat was 60 ft. long and could carry 16 Model-T Fords. The history of Jamestown itself goes back much further and it would be remiss not to mention a few interesting facts before we talk about some of the upgrades that have occurred in the last year.

Jamestown was the first permanent English colony established in May 1607. It served as the colonial capital from 1607 to 1699. It was the site of the first representative legislative assembly in British America in 1619. Despite supply shortages and disagreements among settlers, the colony enjoyed success primarily due to tobacco that was exported to England by John Rolfe. He later married Pocahontas. Visitors to the area can see Bacon’s Castle, the oldest documented brick house in English North America, Smith’s Fort and Chippokes Plantation and State Park.

But let’s get back to what has remained a crucial avenue of transportation for Jamestown—its ferry system. Since that first crossing, the Jamestown-Scotland ferry [as it is now called] has grown. The Virginia Department of Transportation took over operation of the ‘water taxis’ in 1945. Today the fleet carries approximately 936,000 vehicles annually across the James River. The ferry service is an extension of State Route 31 and connects Jamestown in James City County with Scotland Wharf in Surry County. It is the only toll-free, 24-hour state-run ferry in Virginia. With more than 90 employees, the operations budget is approximately $12 million a year.  Four boats—Pocahontas, Williamsburg, Surry and Virginia—make the trip.

The 15-minute ride may be free, but the views are priceless. Many will tell you that it’s easy to imagine what the first colonists saw when they travelled the same waterway 400 years earlier. The region’s historic landmarks can be seen from a unique perspective on both sides of the river.

In 2015 the ferry system marked its 90th anniversary. Click here to watch a video about the event.  In 2018 the VDOT made some major upgrades. The Virginia—a 28-car ferry—was retired when she turned 82 years old in the spring of 2018. The Commonwealth Transportation Board voted to give the new ferry a name that reflected the area’s strength and history. The 70-car ferry was named “Powhatan” after Chief Powhatan, Pocahontas’ father and chief of the Algonquin tribes in eastern Virginia.

Recently the agency also replaced aging chemically-treated wood piles with fiber reinforced polymer (FRP) composite FiberPILE products. Installation of the FRP monopiles was completed in December 2018 on the Jamestown side.  The FRP composite structures can withstand the impact of larger vessels, are environmentally friendly, quick to install and low maintenance.  In our next blog spotlighting the Jamestown-Scotland ferry system, we’ll delve into the details about the design and installation of these FRP monopiles.

Our FRP Dolphins Infographic will teach you more about FiberPILE and breaks down the three different types of dolphins, which are berthing dolphin, mooring dolphin and breasting dolphin. Click here to download it.