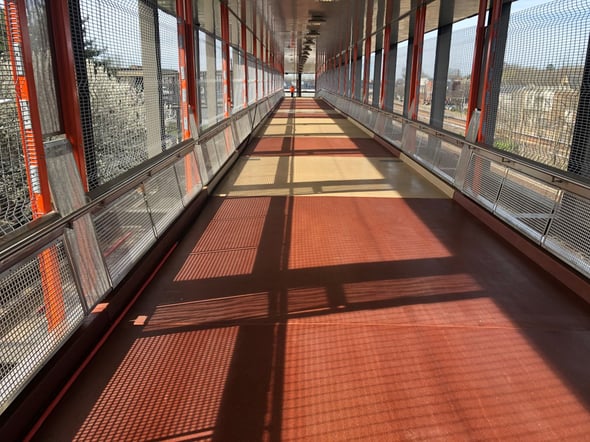 Have you ever wondered what the difference is between an overpass and a bridge? Don’t they mean the same thing? While the term “overpass” can refer to a bridge, it can also be used to describe a road or railway that crosses over another road or railway. A bridge on the other hand is defined as a structure built to span physical objects.

Whether a bridge is an overpass or just a bridge, the need to connect people with places continues to grow.  The demand is especially high for congested cities and urban communities that have nowhere to go but up.  Over the last few years the search for lightweight material with minimal maintenance has fueled widespread adoption of fiber reinforced polymer (FRP) bridge decks.  FiberSPAN composite products are also finding their way into train stations that need pedestrian overpasses to give people access to the public transit mode.

In 2018, we designed two pedestrian bridge decks for the Inman Park MARTA station in Atlanta.  The Blue and Green lines run seven days a week with a train stopping at Inman Park station every 20 minutes.  In addition to ferrying commuters to jobs and other destinations, Inman Park is also a hub for visitors.  It is the closest train station to Little 5 Points and is near the BeltLine Eastside Trail, PATH Stone Mountain Trail, Edgewood Retail District, Krog Street Market, Civil War historic sites, parks and restaurants. The area is considered both hip and historic but the circa-1970s bridges needed a makeover.

The North/DeKalb Avenue entrance gives pedestrians safe passage over vehicle traffic while the South/Seaboard Avenue entrance ferries commuters and visitors across railroad tracks. In 2020, the two pedestrian overpasses received fiber reinforced polymer (FRP) facelifts with FiberSPAN composite bridge decking. Replacing the heavy, decaying concrete was no easy matter due to limited access afforded by the worksite. Tight ingress made the use of precast concrete for the new decks prohibitive. Concrete would have taken longer to pour, causing additional disruption and down time for the rail station. FRP deck panels made it easier for contractors to maneuver and helped to minimize repair and labor costs associated with steel upgrades.  The bridge decks’ light weight allowed designers to use the original steel trusses.

The FRP panels were prefabricated and integrally molded with curbs and crowns for water runoff to drainage scuppers with built-in 14 inch by 19.7 inch trenches. The North entrance pedestrian bridge deck consisted of 11 FRP panels with a total length of 138 feet. The South entrance bridge deck, comprised of 33 panels, had a total length of 394 feet and showcased some unique features such as 90-degree turns. Both decks also received a non-slip surface displaying an attractive pattern created by two different colors of quartz. Owner feedback revealed another advantage. A MARTA spokesperson said the new material’s light weight and high strength helped to reduce vibrations in the bridges generated by the heavy rail system and the CSX railroad lines that run parallel to the MARTA tracks.