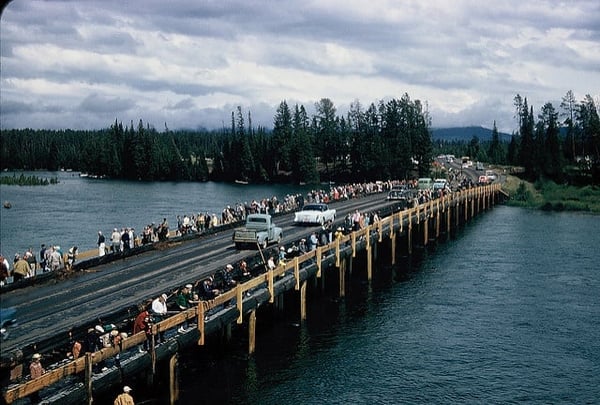 When we talk about our single panel fiber reinforced polymer (FRP) trail bridge we concentrate on things like zero maintenance and a life cycle of 100 years.  We focus on applications and solutions which can sometimes make it easy to “miss the forest for the trees.” In this case ‘the forest’ would be the National Park Service, what it stands for, what it means for visitors, and the preservation efforts we can contribute to with our product.

The National Park Service is a bureau of the U.S. Department of the Interior. But its roots trace back to the Yellowstone National Park Act of 1872 which was signed into law to establish the world’s first national park. The legislation act covered 2 million acres of public domain in the Montana and Wyoming territories and gave the Secretary of the Interior the big job of preserving timber, mineral deposits, geologic marvels and other resources. President Theodore Roosevelt signed the Antiquities Act in 1906 to extend the reach of park service protection to prehistoric cliff dwellings, pueblo ruins and missions in the Southwest.

The Act authorized Presidents to proclaim and reserve "historic landmarks, historic and prehistoric structures, and other objects of historic or scientific interest" on lands owned or controlled by the United States as "national monuments." It also prohibited the excavation or appropriation of antiquities on federal lands without permission from the department having jurisdiction.

There was a reorganization in 1933 that assigned these historical areas and historic preservation as part of the primary mission of the National Park Service.

You can read about the other pieces of legislation that have since passed and helped the park service evolve in the bureau it is today.

A couple examples of how the funding has aided tribal efforts and accomplishments includes:

You can read more about the National Park Service historic preservation programs and grants here.

Whether it’s a local state park or a national monument, our FRP prefabricated trail bridge systems can be constructed to blend with natural surroundings. Its unique characteristics make it a green technology that meshes nicely with the preservation goals of agencies like the National Park Service who also want to continue to provide the public with access to these amazing sites.