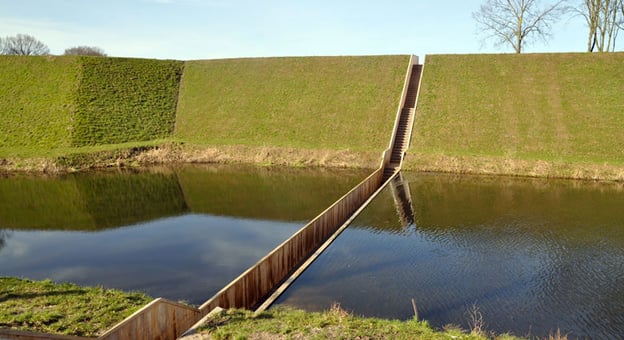 We’ve really been having fun with the "unique bridges" theme in our latest blogs, and we hope that you have too. ICYMI, we've explored  London's Rolling Bridge and Austria's Murinsel. This time, we're featuring a very interesting bridge with a lot of history, located in the village of Halsteren, Netherlands.

The Moses Bridge, also known as Loopgraafbrug (trench bridge), is located in what was once a protective fortress called Fort de Roovere. Way back in the 17th century, a series of moats and fortresses protected this area of the Netherlands from Spanish and French invaders. Fort de Roovere was the largest of these fortresses on the West Brabant Water Line.

Over the centuries, the fortress and moat became a bit dilapidated, so authorities decided to move forward with a restoration. They needed a means to cross the waterway but feared a traditional bridge would inappropriately stand out, compromising the historical significance of the moat. The designers saw an opportunity to create a unique “trench bridge” which could actually go through the moat, “parting the water” (hence the biblical reference to Moses parting the Red Sea).

The Moses bridge is composed of wood waterproofed with foil.  You might be wondering, “Why doesn't water spill over the sides of the bridge?” The answer lies in the adjustable dams on the sides of the moat that control the water levels. In the case of heavy rain, a pump under the bridge clears out extra water. This bridge has become a very popular tourist attraction and is enjoyed by many pedestrians and cyclists.