A Bridge to Remember (And Last) for a Long Time 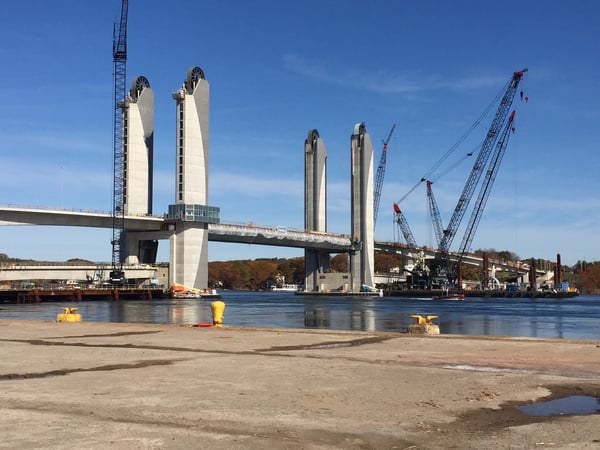 The Sarah Mildred Long Bridge opened earlier this month just in time to welcome Memorial Day traffic. Like silent film star Lon Chaney who was called the man of a thousand faces, you might say the lift-span that carries Route 1 over the Piscataqua River between Kittery, Maine and Portsmouth, New Hampshire is a "bridge with a thousand names."

The structure was built in 1940 to replace a crossing that dated back to 1822.  Its names over the decades have included “Toll Bridge,” “Dime Bridge,” The Railroad Bridge” and the “Middle Bridge.” For a number of years, it was simply called the Maine-Hampshire (Interstate) Bridge. In 1987, officials renamed the crossing Sarah Mildred Long Bridge in honor of a long serving employee that worked for the Maine-New Hampshire Interstate Bridge Authority for 50 years.

Given the multi-functional aspects of this movable bridge and its 100-year design life, Sarah Mildred Long Bridge has the distinction of being the most expensive infrastructure project in state history. The cost to replace the 80-year-old lift-span totaled $165 million.

Other special features include vertical clearance for larger ships and a steel box lift span capable of carrying vehicle and railroad traffic above the steel superstructure.  It became the first of its kind in the U.S. to shoulder four precast 200 ft. tall concrete towers that support a 300 ft. long structural steel box girder lift span. When engineers needed to stabilize the structure during severe weather and high winds, they turned to fiber reinforced polymer composites. Cianbro Corp., the project’s contractor, selected Composite Advantage to design and fabricate two sets of fiber-reinforced polymer (FRP) wind fairings. Each was engineered to house an internal walkway to accommodate inspection and maintenance activities. Completion of the bridge and the use of advanced materials is a nod to the technology that will rebuild the nation’s infrastructure.

We also need to remember the significance of the upcoming holiday.  While the Sarah Mildred Long Bridge has yet to hit the century mark, Memorial Day can trace its roots back to 431 B.C., when Athenian general and statesman Pericles delivered a public speech praising the sacrifice and courage of those who fought in the Peloponnesian War. Following the Civil War the holiday evolved into what became known as Decoration Day. The Uniform Monday Holiday Act of 1968 established Memorial Day on the last Monday in May. It became a federal holiday in 1971.

Today Memorial Day is dedicated to remembering and honoring military personnel who died in service to their country. The freedoms we enjoy today include the independence to pursue creativity and technology advances that improve our world. If you happen to be on a road trip this Memorial Day weekend and it takes you across the Sarah Mildred Long Bridge spend a few minutes reflecting on the many people who worked to build it and those who “have our six.”