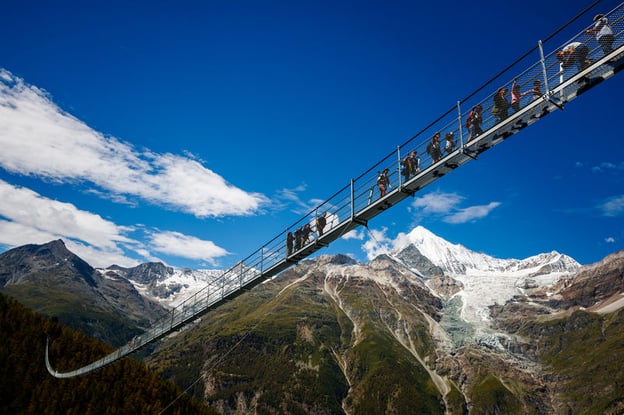 In Alfred Hitchcock’s 1958 psychological thriller Vertigo, actor James Stewart plays former police detective John "Scottie" Ferguson. Following an incident in the line of duty, Ferguson is forced to retire when he finds he has developed acrophobia (an extreme fear of heights) and vertigo (a false sense of rotational movement).

Visitors to southern Switzerland now have the chance to test their nerves and discover whether or not they too suffer from a fear of heights - if they have the mettle to walk the world’s longest pedestrian suspension bridge.

The 1,621 ft. long Charles Kuonen Suspension Bridge, so named for its primary sponsor, opened in August. The bridge is approximately two feet wide which means those brave enough to face the challenge, taking an average of 10 minutes, must walk single file. As an added bonus for those feeling particularly daring, the bridge deck is see-through. Visitors can look straight down at the valley 279 ft. below, or, perhaps wisely, keep their eyes trained on the Matterhorn.

The new bridge completes the Europaweg (hiking trail) from Grächen to Zermatt, as a previous bridge was damaged in a rock slide and deemed irreparable. To prevent a similar fate, the new structure is built taller and longer. The metal deck is carried by two ropes more than 2 in. thick, anchored at either end. The ropes alone weigh 8 tons.

Just reaching the bridge isn’t for the faint of heart. From Randa it’s a 2 to 2.5 hour hike. From Grächen, plan to walk 6 to 7 hours before you reach the site. The bridge is open year round, though Zermatt’s office of tourism strongly advises hikers to avoid the bridge during storms accompanied by lightning.

The Charles Kuonen Suspension Bridge’s singular length landed it in the Guinness Book of World Records, beating out Japan’s 2006 Kokonoe Yume bridge. So, if you happen to be planning a trip to Switzerland (and you have a notion to challenge yourself), be sure to visit this bridge. According to the office of tourism, the view of the Swiss Alps is spectacular - depending on your point of view and how wobbly your knees are.

If you aren't planning a visit to Switzerland anytime soon, you can live vicariously through YouTube.