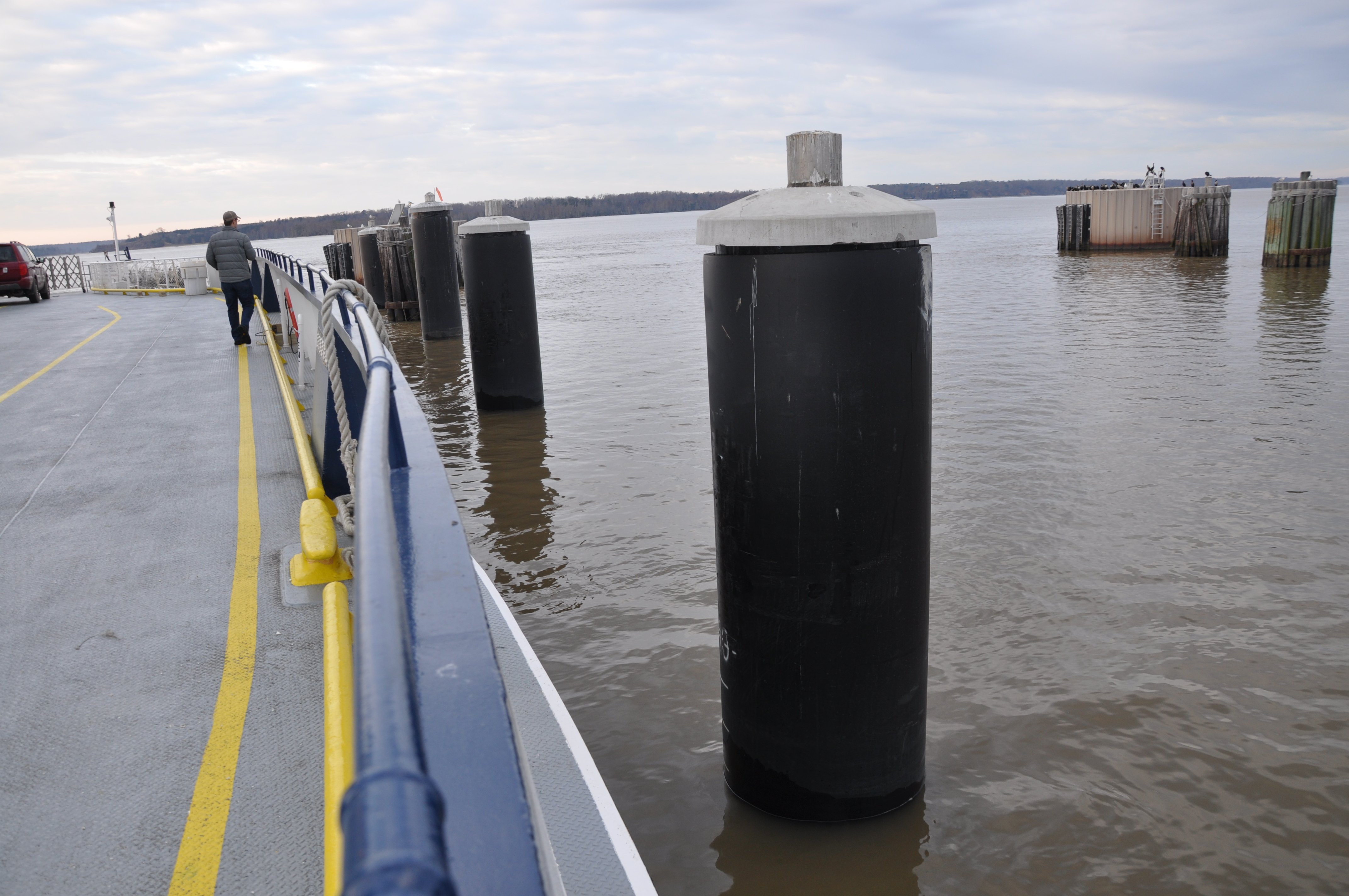 According to the Virginia Department of Transportation (VDOT) the toll-free Jamestown-Scotland Ferry operates 24 hours a day, 365 days a year including major holidays to carry passengers across the James River. On Christmas Day, the ferry runs on the hour in Surry and on the half-hour in Jamestown. That’s a lot of wear and tear.

In 2018, the agency made some major upgrades that included retiring The Virginia—a 28-car, 82-year-old ferry—with a new 70-car ferry.  The vessel was renamed “Powhatan” after Chief Powhatan, chief of the Algonquin tribes in eastern Virginia. Board members felt the name reflected the area’s strength and history.  Strength was also a contributing factor in the VDOT’s selection of fiber reinforced polymer (FRP) composite FIberPILE as a replacement for aging chemically-treated wood piles. Installation of the FRP monopiles was completed in December 2018 on the Jamestown side.  Bigger boats like the Powhatan coupled with wind conditions demand enhanced durability and have helped pave the way for adoption of FRP monopiles.  A look at design and installation reveal other key advantages like the savings VDOT realized in terms of time and costs. In addition, the composite product conforms to stricter environmental guidelines.

VDOT Jamestown-Scotland Ferry Facility Manager, Wes Ripley, told Composite Advantage that certain pilings took more abuse than others based on location. The pilings in the middle of the row seem to deteriorate more quickly and were replaced more frequently. Three to five timber piling clusters [made up of 37 pilings] were typically replaced with an annual maintenance budget of $500,000 to $850,000.

The flexibility of FRP materials allow FiberPILE products to be engineered to any diameter or thickness required. The Jamestown-Scotland Ferry’s unique requirements made FRP a suitable choice. The FRP monopiles were fabricated to a total length of 100 ft. using multiaxial E-glass reinforcement.  Fifty-nine percent of the glass fibers were oriented at 0 degrees [parallel to the longitudinal axis of the pile] for the lower 80 ft. of each monopile.  Eight percent of the glass fibers were given a 90-degree orientation and the remaining fibers at an orientation of ± 45 degrees. The specifications for this section of the FRP pile were engineered to provide bending characteristics capable of handling overall ferry impact loads. The top 15 ft. of the pile was manufactured with the majority of glass fibers focused on the hoop direction with eight percent in a 0-degree orientation [parallel to the longitudinal axis of the pile]. Fifty-nine percent of fibers had an orientation of 90 degrees [hoop direction] and the remaining fibers at an orientation of ± 45 degrees. This combination allowed the monopile’s upper 15 ft.—the portion above the waterline—to best absorb large crushing loads at the point of impact. Five feet [between the lower and upper portions of the monopile] was used to transition the changing fiber orientation. The outside diameter for each monopile was 2-in. thick. Wood has 42 ft.-kip energy absorption. The FRP piles were engineered for 585 ft.-kip energy absorption.

To drive FiberPILE products, a contractor can use standard equipment like a vibratory or impact hammer.  Hollow construction, light weight and low driving friction make FiberPILE products attractive to contractors.  Crews began to install FRP monopiles for the Jamestown-Scotland project right after Labor Day 2018. “We have a short window for installation projects that range from the Tuesday after Labor Day to February 15,” says Ripley.  The reason has to do with Atlantic sturgeon making a comeback in the James River. The fish are federally protected.  “We want to disturb the river bottom as little as possible,” Ripley says.  Another benefit is the FRP monopiles don’t leech chemicals into the water.

To distribute construction costs, a phasing plan was developed that started with dolphin replacement/installation on the Jamestown side first, with the Scotland side in the future.  Setup took a day and required contractors to create a template with I-beams that gave workers access to the monopile. “Once everything was in place, contractors were able to drive a 100-foot monopile the desired 60 ft. into the river bottom in 25 ft. of water in as little as 20 minutes,” Ripley says. “That left about 15 ft. of the pile above the water line.” CA also attached collars to the dolphin’s exterior to provide a shelf for an HDPE pipe to act as a sleeve. The low friction, abrasion-resistant material spins during impact to move the ferry along and protects the FRP pile from gouges created by the ferry’s edge. Eight FRP monopiles replaced dolphin clusters of 37 wood piles each. Click here to see a video of the Jamestown-Scotland installation.

Need an advanced solution for your aging waterfront structures? Give us a call. We’d love to talk with you.