Ridership In A Free Fall? 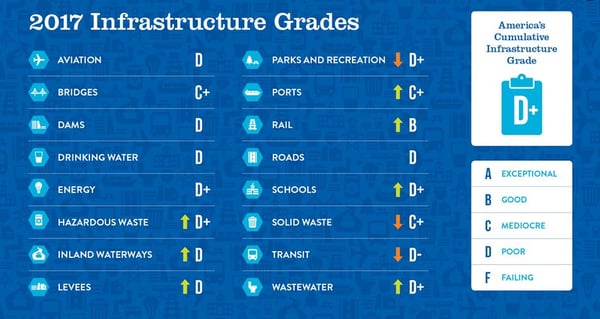 In May, organizations and communities across the country participated in the 6th annual National Infrastructure Week. The event’s theme was “The Future Won't Wait. Neither Can We. It's #TimeToBuild.”

In 2017, we got our first in-depth look at the state of the nation’s infrastructure when the American Society of Civil Engineers’ (ASME) issued its quadrennial report with a grade of D+. Of the 17 segments evaluated, the report detailed decades of under investment in America’s aging bus and rail public transit framework. The American Public Transportation Association (APTA) released a new study during National Infrastructure Week about the impact of this decline on the nation’s economy.

The report revealed that “failing to address America’s $90 billion backlog of public transit modernization needs, also referred to as State of Good Repair, resulted in a loss of $340 billion in business revenue to the U.S. economy over a six-year period. These results were based on the study The Economic Cost of Failing to Modernize Public Transportation, which was conducted by the Economic Development Research Group Inc. for APTA.

The study also highlighted the impact of accessibility for businesses looking to put down roots in a community.

Dedicated bike lanes, bike sharing programs and fast public transit are popping up in some cities. But these efforts seem to fall into three categories. Firstly, lack of cash in areas like Detroit and Memphis is causing some proposals to fail to completion.

But in growing metropolises like Silicon Valley, Vancouver, Toronto, Los Angeles and Washington, D.C., we see funding being used to support rail, stations, bridges, rail cars and buses. In a third approach, a state or multi-city commission announces a “plan” but under funds it (Atlanta, Pittsburgh, Albuquerque, Raleigh-Durham, Minneapolis-St. Paul). Sometimes that’s the result of too few matching federal dollars trickling in as well.

A second study released in May by the Government Accountability Office (GAO) states that the Federal Transit Administration has not addressed three statutory provisions concerning the Capital Investment Grants program as part of two transportation funding laws. By not evaluating and scoring eligible projects that need funding, by not identifying interrelated projects to be developed simultaneously, and by not creating a fast-track approval process for transit projects, FTA is basically withholding monies earmarked for public transit improvements.

“If FTA does not implement the outstanding provisions, then FTA and project sponsors—that is, local transit agencies—may be missing opportunities to deliver transit projects more efficiently,” the GAO report states.

Construction projects worth tens of billions of dollars are in various stages of development reaching well beyond 2025. This bodes well for cities, commuters, employers and the industries that produce and fabricate materials for transit infrastructure. It also opens the door for advanced materials like fiber reinforced polymer (FRP) composites. Our FiberSPAN-R FRP rail platforms are gaining acceptance with transportation agencies because FRP provides a corrosion-resistant structure that can stand up to the wear and tear of weather, de-icing chemicals and high foot traffic without the need for upkeep.