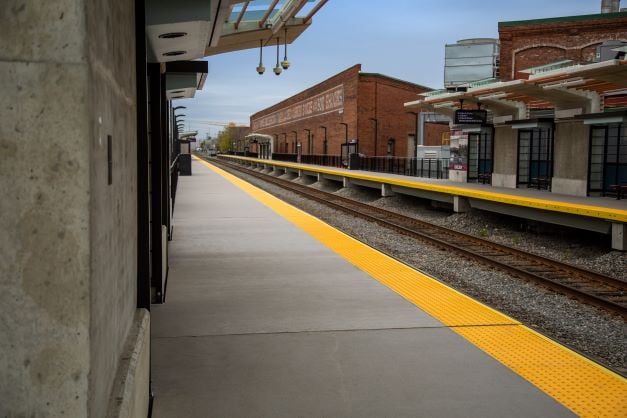 In my first blog of this Inspection Log series, I talked about being able to see first-hand, how our Fiber Reinforced Polymer (FRP) bridge decks were holding up. As part of my trip along the East Coast, I also visited the sites where we installed FRP rail platforms. That product sees a lot of traffic, so I was interested in examining the platforms, one of which has been in use for a decade.

In 2011, the New York City Metropolitan Transportation Authority opted for FRP for its Court Square Rail Platform. The installation in Queens, New York was completed in 2012. Structural profiles are in good condition, but the epoxy grit non-slip surface has worn off in high-traffic areas. Because of observations like this one over the past few years, CCG identified and chose polymer aggregate for non-slip overlay applications to improve wear and tear in high-traffic infrastructure.

The West Natick Rail Accessibility Platform was designed, fabricated and installed in Boston in 2017. Due to wheelchair access, the Massachusetts Bay Transportation Authority uses a lot of deicing chemicals. The original concrete fell apart in just 15 years. Repaired pier caps are rusting again. But our FRP panels and stainless steel clips remain in good condition.

In 2018, we installed an FRP three level-switchback ramp at Chelsea, Massachusetts’ Bellingham Square Station. The structure eliminated a long walk for commuters by providing a direct pathway to the bus and rail station. That same year, we were contracted to mold two single-level FRP 800-ft. long platforms for installation on both sides of the tracks servicing Silver Line 3 which runs through Chelsea, Massachusetts. We prefabricated the FRP platforms with attachment locations for benches, lights, railings and other accessories. That station opened for service in 2021.

Annadale Rail Platform was installed in Staten Island, New York in 2020. Deteriorated concrete sections of the platform deck were replaced with corrosion-resistant FRP deck panels. Each side platform section was 220 ft. long and 8 ft. wide. Panels were 31.5 ft. long for fast installation. Supported on concrete piers, the panels were cross-sloped for water drainage. The top surface has a shop-applied non-slip overlay that matches the color of the adjacent concrete surfaces. Warning tactiles with a photoluminescent stripe completed the safety features. A rub rail was included. Each side platform was installed during a one-night period without any impact on the train schedule or riders. A white aggregate was used for the non-slip overlay to best match the adjacent concrete color. However, the light color does show dirt from users as well as from overhanging trees and dirt banks. Gray aggregate or polymer color tint would provide a cleaner appearance.

The Massachusetts Bay Transportation Authority selected FRP for its Middleborough Rail Platform as part of its e South Coast Rail project. The curved platform looks more impressive onsite than it did in plans because it follows the curved track. Panels lined up well. The MBTA also sourced FRP for its Fall River Rail Platform which was installed in 2022. Panels fit well with concrete pedestals and exhibited superior durability when one panel was dropped during erection. It sustained some tactile and cosmetic damage, but the panel’s structural integrity remained intact. I also learned that the contractor has already had to move a homeless individual from under the platform. This is one of the reasons we design our rail platforms to meet fire-resistant specifications.

According to the American Society of Civil Engineers, the nation’s rail network is divided into two categories: freight rail and passenger rail. ASCE estimates that 140,000 rail miles are operated by freight’s Class I, II, and III railroads. Amtrak operates a network of more than 21,400 miles, 70 percent of which is owned by other railroads [also known as host tracks]. Yet the challenges the two rail categories face are decidedly different. Freight maintains a strong network primarily through direct shipper fees, an average investment of more than $260,000 per mile. Passenger rail, on the other hand, requires government investment. The ASCE 2021 Infrastructure Report Card stated that the lack of federal support up until now has led to a current repair backlog of $45.2 billion. The ability to provide the industry with a low-to-no maintenance product like an FRP rail platform offers an economical, high-performance solution that can make an important contribution to the welfare of the nation’s rail system.

The next blog in this series will look at the results of inspections we conducted of our FRP bridge fenders and waterfront sheet pilings and dolphins. Make sure to subscribe so you don’t miss anything!