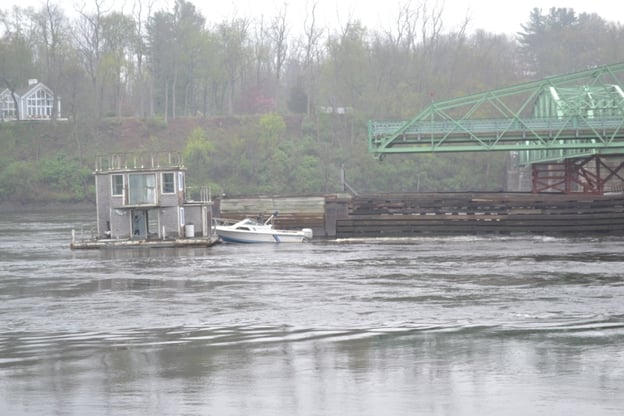 Last week I was in the South Boston area participating in a final inspection of a high-end pedestrian bridge that will be opening in the next month.

Anytime that I'm near bridge decks we've previously installed, I make it a point to visit the bridge to monitor the decks. That led me to Rocks Village Bridge in Haverhill, Massachusetts where Composite Advantage has an FRP deck on a vehicle bridge. The Rocks Village Bridge, pictured above, is a six-span historical truss bridge with a movable span in the middle. While I was inspecting the deck panels, the non-slip overlay and the underside of the bridge, the crew came out to open the bridge so a boat could pass through. The swing span is manually operated and apparently opened at least three to four times per week. Since I'd never seen this swing span open, I stayed around to watch.

Three guys came out to the middle of the span to remove the access hatch in the deck panel. They inserted their large turn bar and began cranking to open the bridge (see video below).

I envisioned getting a wonderful PR picture of a majestic sail boat coming down the river. As I stood on the bank taking photos and video, I was surprised by what was coming through. I think you can call it a houseboat since it was some sort of house on some sort of float being pushed by a boat. You must see the photo and video to understand.  Although I didn't necessarily end up with the glossy PR photo I was hoping for, I did get an interesting story.