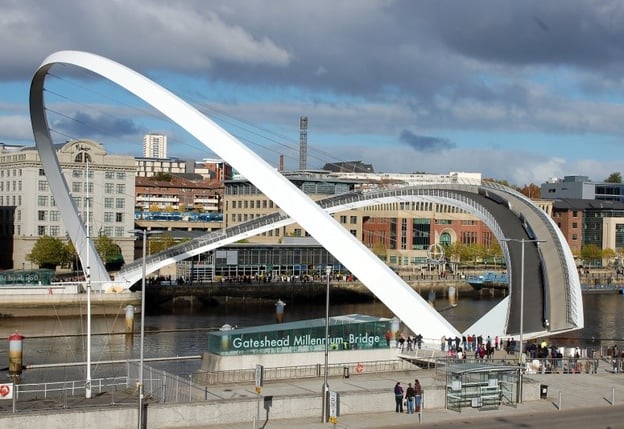 To continue our blog series on unique bridges, let's examine another English wonder.

While the first thing we may think about in bridge design is what's going over the bridge, consideration must be given to the objects going underneath it. It's especially common for bridges to pass over waterways that are regularly used by boats. Bridge designers and architects must address boat clearance and the length of the approaches to reach clearance elevations. Movable bridges, like the Rocks Village Bridge in Massachusetts, are popular solutions for these situations. Let's look at a very different movable bridge in England.

In 1996, the city council of Gateshead, England held a contest in search of a creative pedestrian bridge design. The winning bridge would span the River Tyne, connecting Gateshead to the city of Newcastle-upon-Tyne. Over 150 designers entered, but Wilkinson Eyre Architects and Gifford & Partners created something that fit all of the council’s criteria.

The innovative design that became the Gateshead Millennium Bridge called for a pedestrian bridge that could “tilt,” or rotate, to allow large boats to pass beneath it. Three hydraulic rams on each side of the bridge make this possible. Boats up to about 80 feet tall can pass under the bridge. It takes approximately four and a half minutes for the bridge to tilt through the 40° rotation to open, and the same amount of time to close.

The bridge has won a number of rewards, appeared in numerous television/film projects and is today considered a monumental landmark in England. The unique pedestrian bridge wa 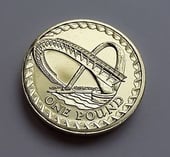 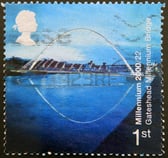 s featured on a first class stamp in 2000 and even appeared on a 2007 one pound coin. The bridge is a very popular spot for pedestrians and cyclists to enjoy the views of the River Tyne.

Interested in learning more? Check out a time lapse video of the Gateshead Millennium Bridge in action: https://www.youtube.com/watch?v=S7nXXy1NhpM