Shall we start with the bad news?

Every four years The American Society of Civil Engineers (ASCE) issues a report card on the condition and performance of the nation’s infrastructure. We’ll have to wait another year before the new grades are released but I’m sure it’s no surprise that 2013’s report card was dismal, with “Bridges” earning a whopping C+.

The report card also states, “one in nine of the nation’s bridges are rated as structurally deficient, while the average age of the nation’s 607,380 bridges is 42 years.” The Federal Highway Administration (FHWA) estimates that it will take an annual investment of $20.5 billion to eliminate the nation’s deficient bridge backlog by 2028. The ASCE also reports that over two hundred million trips per day involve a crossing over a deficient bridge. This only includes the nation’s 102 largest metropolitan regions. Factor in rural bridges and the number goes up. 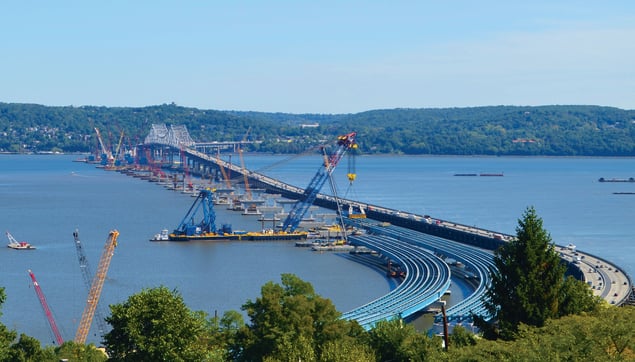 It looks like we’re starting to chip away at all these repairs. The FY 2016 President’s Budget Request includes $317 billion for America’s highway system. Major projects for critical structures like the Tappan Zee Bridge just north of New York City are already underway. At 16,013 feet long, the Tappan Zee is the longest bridge in New York City, carrying seven lanes of traffic (interstates 1-87 and 1-287) across the Hudson River.

By 2018 the New NY Bridge, pictured above, will have replaced the Tappan Zee, connecting Tarrytown on the east shore to South Nyack on the west. The largest infrastructure project in the state’s history, the bridge will consume 260 million pounds of steel, including the foundations, substructure, 419-foot towers and rebar.

Smaller local bridges also suffering the debilitating effects of age and corrosion may have to wait awhile before the new budget dollars flow downhill. In the meantime, for bridge owners and commuters who are holding their breath, Fiber Reinforced Polymer composite bridge systems offer a robust, lightweight solution that is maintenance-free. These composite bridge systems also carry a 100-year lifespan, which is likely to exceed that of the New NY Bridge. Want to learn more? Give us a call today.