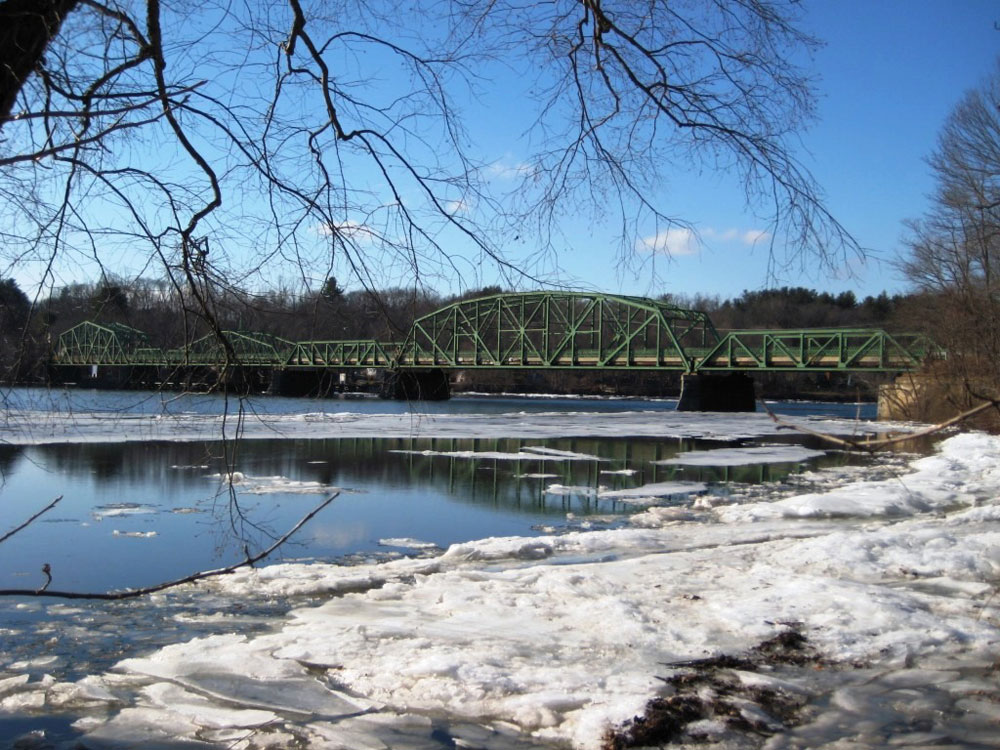 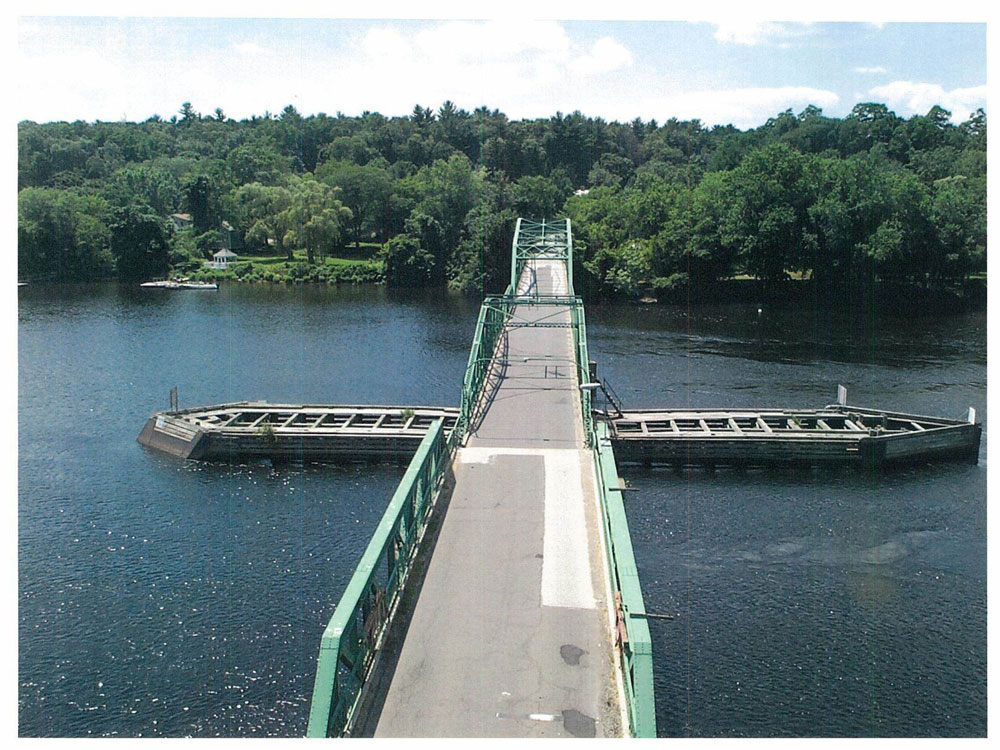 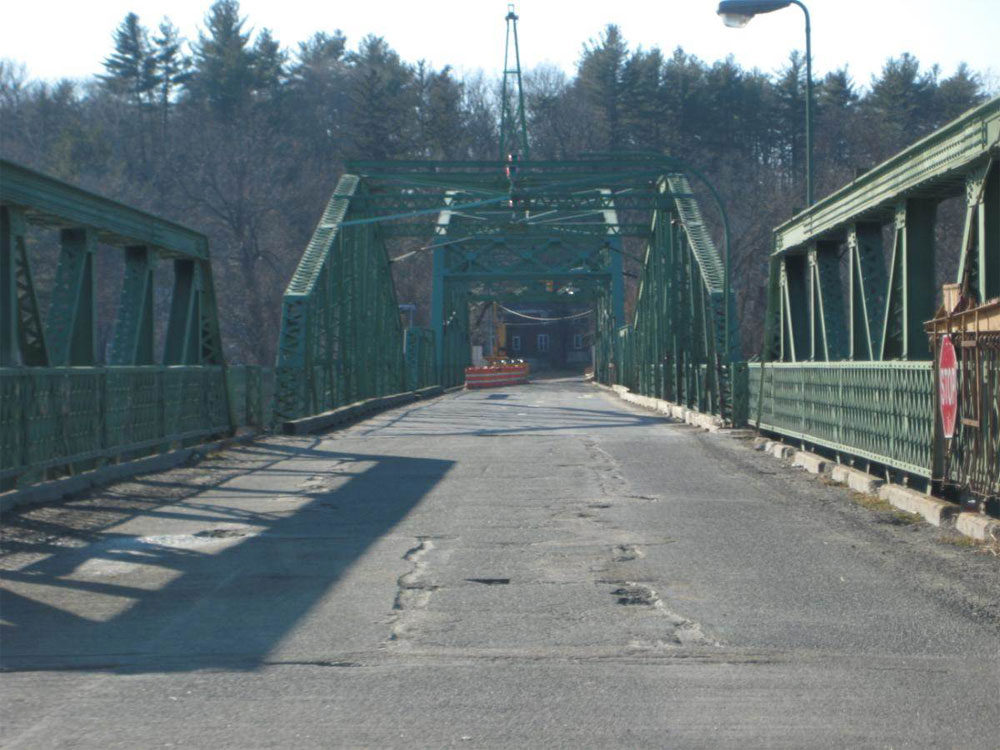 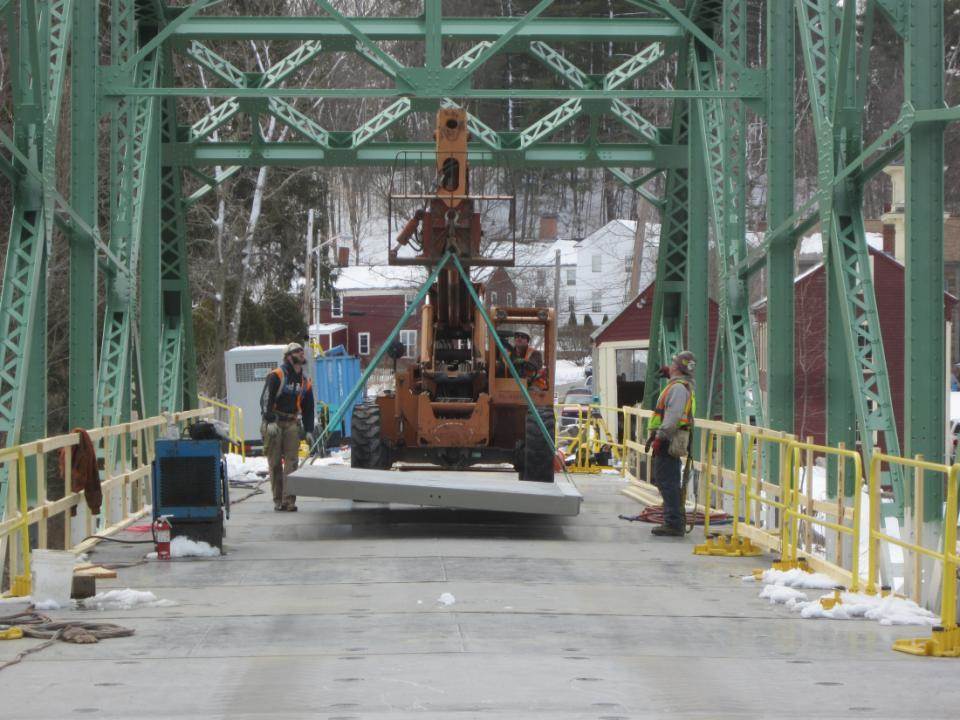 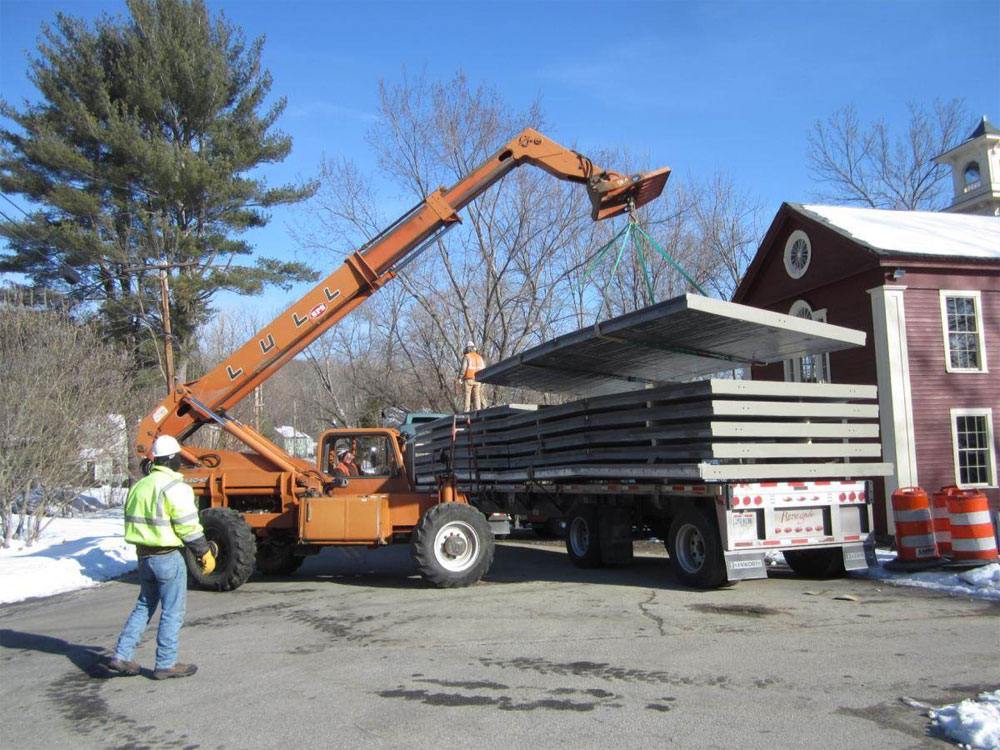 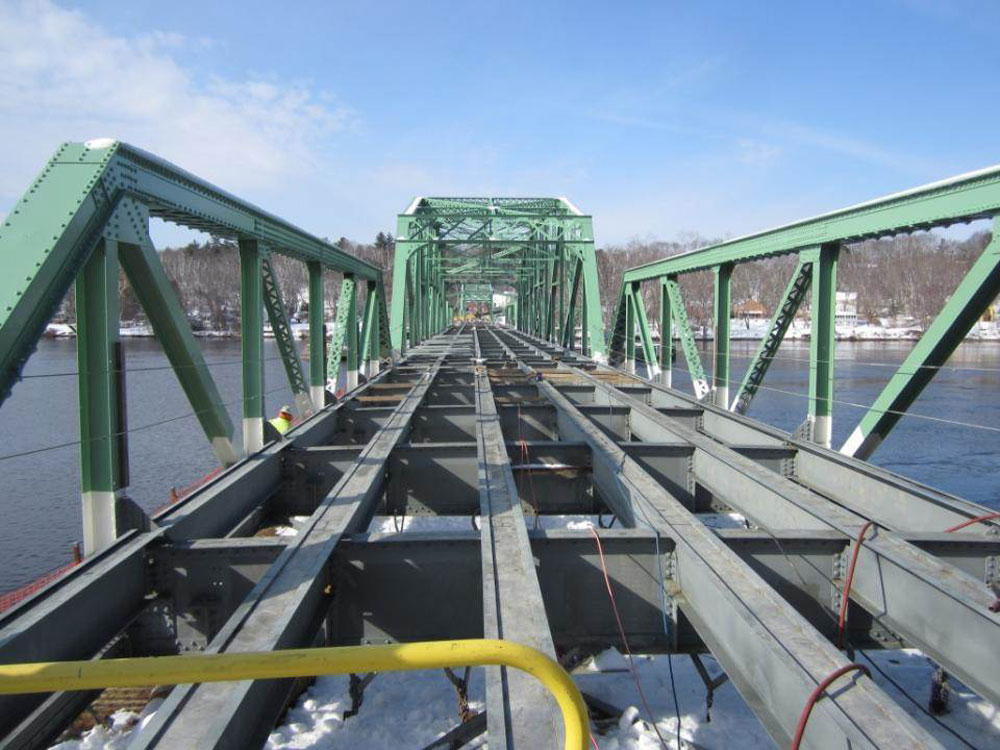 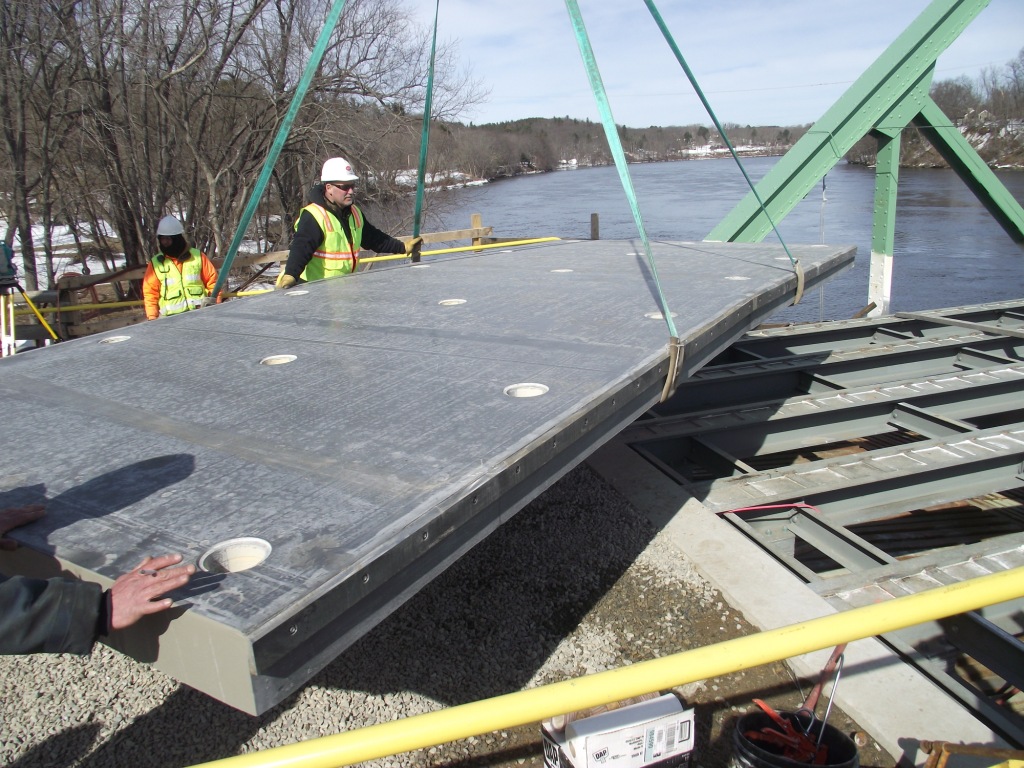 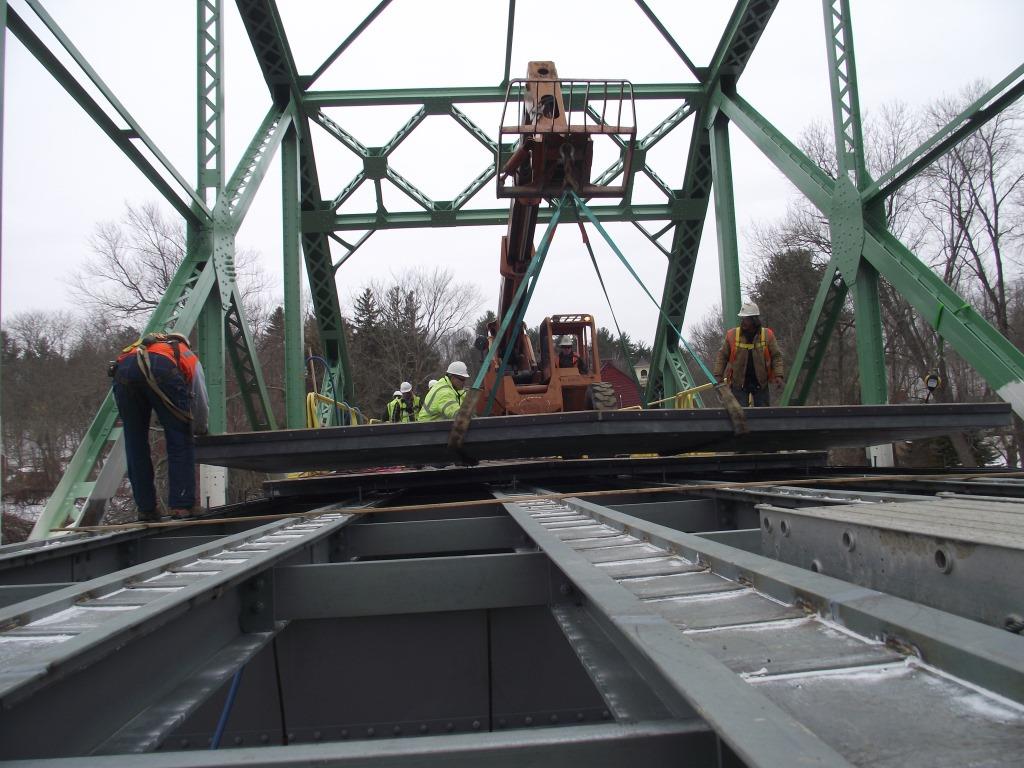 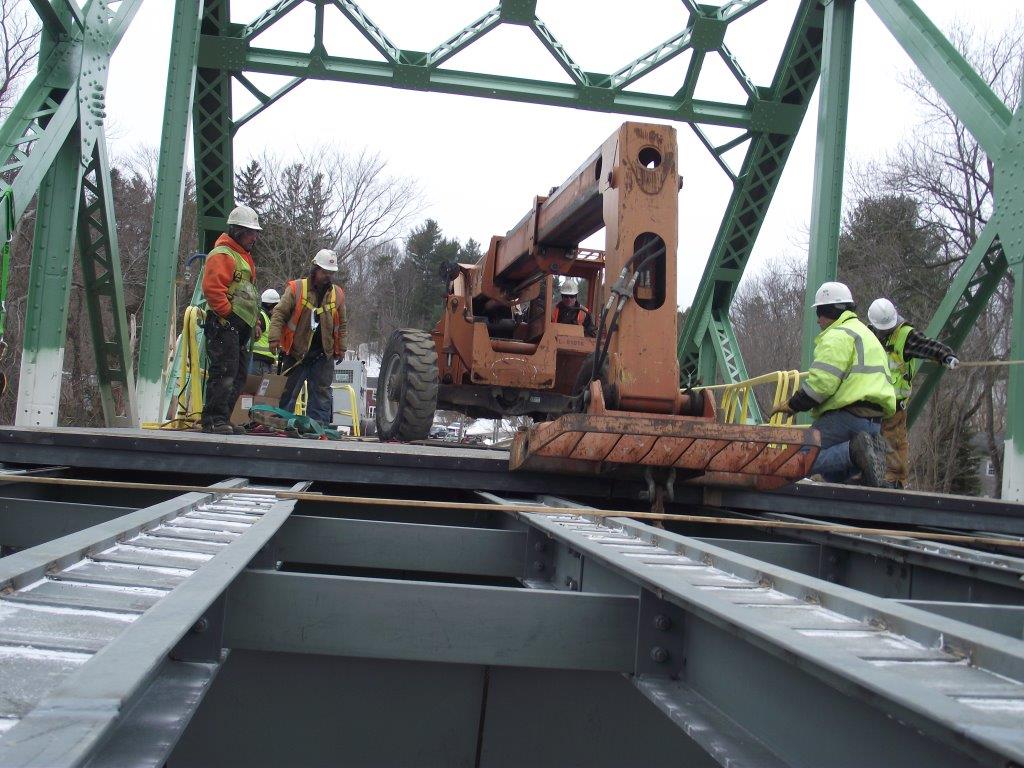 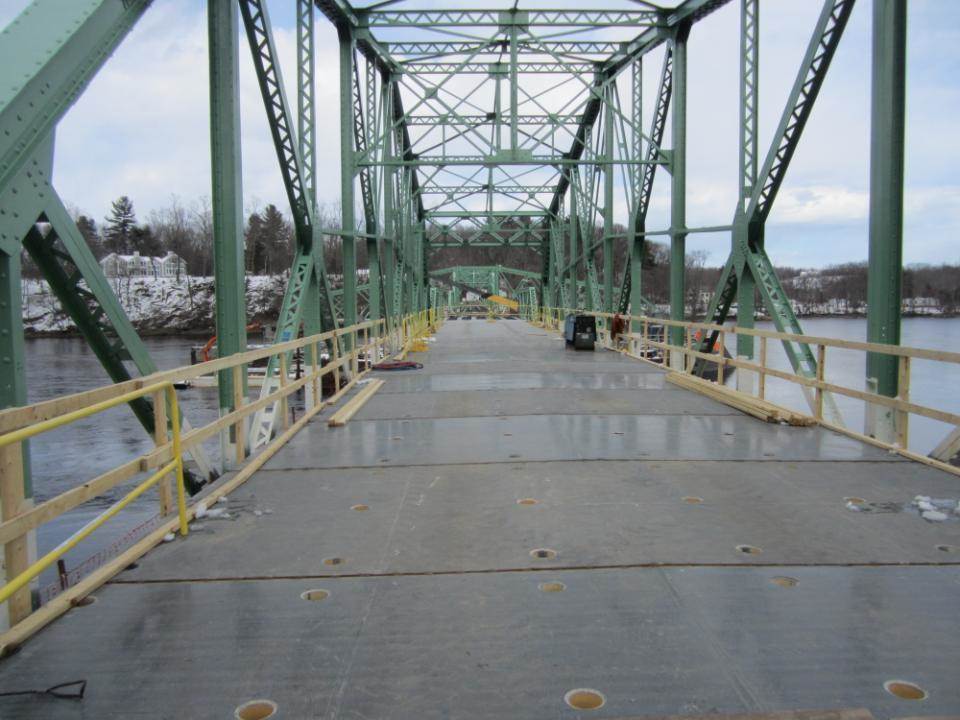 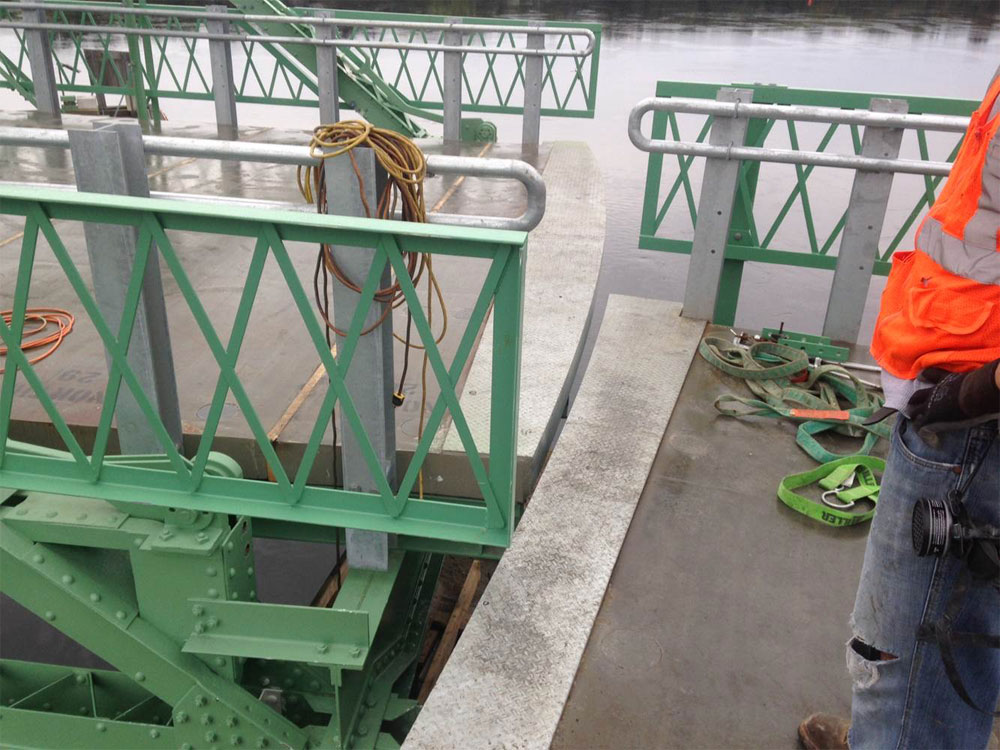 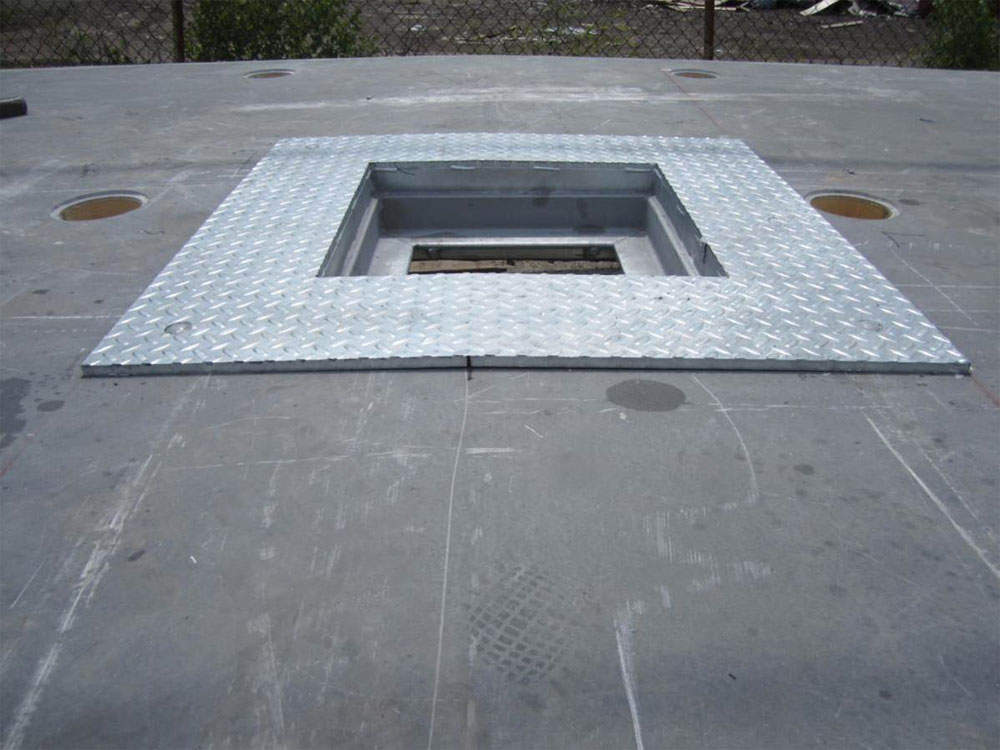 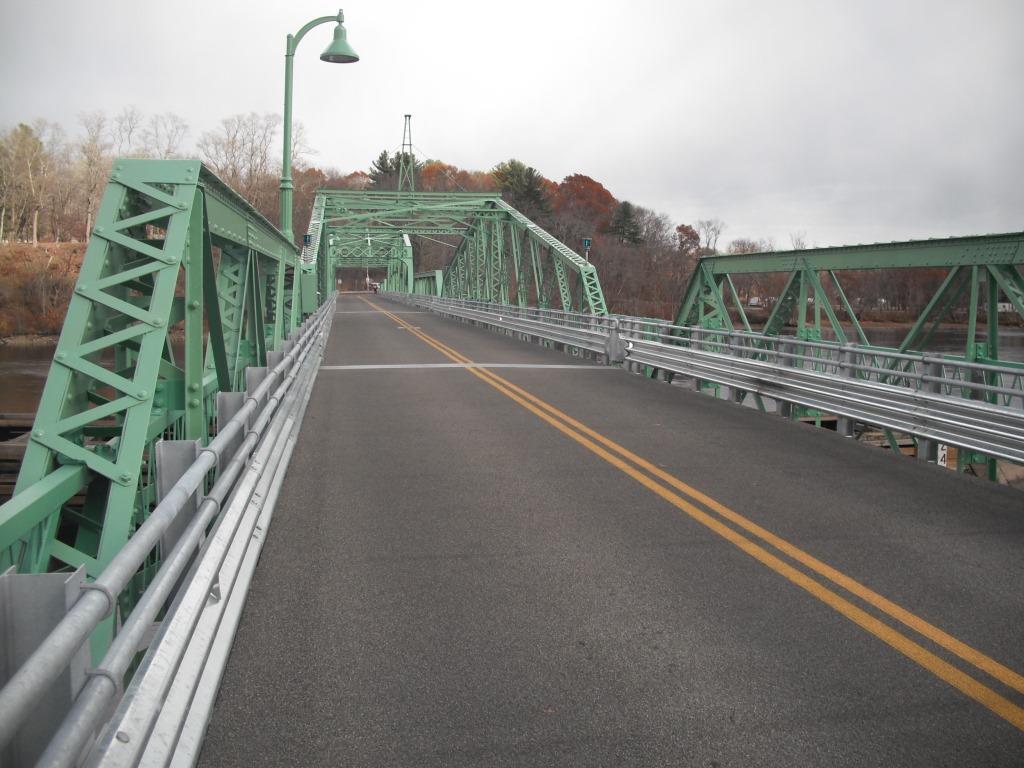 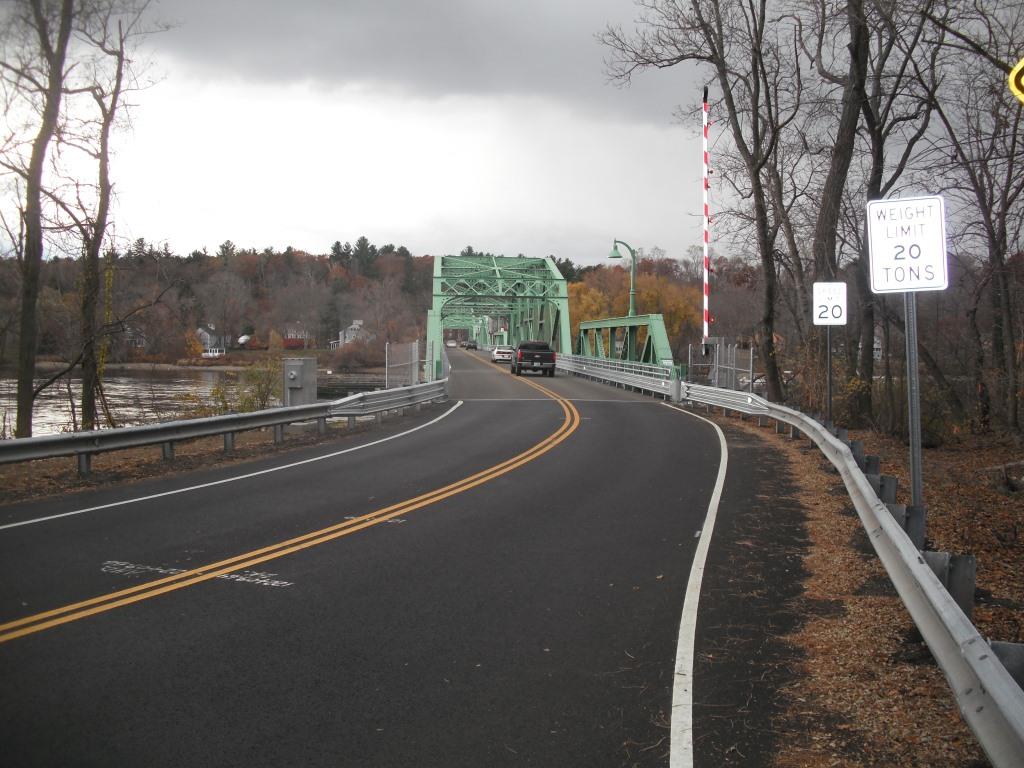 Overview: This six span steel truss bridge in northeast Massachusetts has a swing span for Span 3. After with rehabilitation of steel structures and mechanical, the FRP deck was installed to keep minimize the dead load. FiberSPAN decking provided a prefabricated product to allow the contractor to meet an aggressive construction schedule. The deck panels incorporated many features such as railing post attachments, expansion joints, access platform supports, and a manhole for access to mechanical systems.

Rebuild of a Steel Truss Bridge in Haverhill, Massachusetts

Historic and notable bridges in the U.S. currently number 54,957. Preservation activity - the cyclical work that keeps these special structures in good repair – is as crucial as regular oil changes are to vehicle longevity and performance. Rehabilitation on the other hand can sometimes present a conundrum. When these protected causeways need an overhaul, area DOTs and local organizations are often scrambling to find solutions that can strike a delicate balance between retaining historic character and making the necessary modifications or additions needed for continued use.

The Massachusetts DOT found its answer in Fibre Reinforced Polymer composite material when aging timber put the state’s Rocks Village Bridge at risk in 2013. The six-span structure was built in 1883 and rebuilt in 1914. It supports heavy vehicle traffic over the Merrimack River and is a connecting link for West Newbury, Merrimac and Haverhill residents as well as several southern New Hampshire towns. Rocks Village bridge is also equipped with a hand-operated swing span to accommodate boats; making it the oldest movable bridge in the state. Massachusetts DOT and its design and engineering team along with three historical societies with overlapping jurisdiction wanted to preserve the bridge’s original outer steel truss latticework by cleaning and recoating the metal. To upgrade the bridge’s structural capabilities, six new interior longitudinal steel beams were chosen in lieu of total bridge replacement. Two factors dictated a lightweight bridge deck solution: the exterior metalwork which carried some load as part of the overall structure and the need to retain the swing span’s hand crank operation.

“FRP material was really the only option for producing the lightweight decking they needed,” says Scott Reeve, president of Composite Advantage. “It would have been nearly impossible otherwise to achieve a bridge that functioned according to current safety standards yet maintained the largest percentage of both the character and the original aspects of the bridge.” A typical concrete deck weighs 100 pounds per square foot, creating a dead load a “historic steel truss can’t tolerate.” Steel grate is lighter weighing in at just 25 pounds per square feet. “But grating has other issues such as its susceptibility to corrosion,” Reeve notes. FRP weighs just 19 pounds per square foot and provides a solid surface that is watertight and resistant to corrosion, moisture and chemicals. 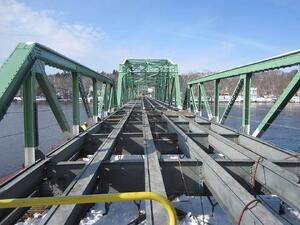 The FRP deck design called for a continuous transverse span to carry vehicle loads over the new steel longitudinal beams. Because the original latticework was comprised  of uneven trapezoidal shapes, CA engineers had to work closely with the designer and he contractor who surveyed the bridge to determine correct dimensions for the new deck. “One end of the bridge was actually narrower than the other end,” says Reeve. “Anytime you are dealing with older structures, this type of information is crucial to ensure deck panels fit tightly.” Design parameters also called for the deck to support loads transferred from the guardrail. In the event of impact, guardrails on three of the spans were attached to the top of the FRP deck while rails for the other three spaces were attached to the deck’s sides. “This is where the design flexibility of FRP is an advantage,” Reeve explains. “We prefabricate panels at our manufacturing facility. By coordinating design and construction specifications upfront we’re able to accommodate special requirements at the fabrication phase instead of on the job site. In the case of the guardrails, actual load path travelled through steel box tubing that we moulded inside the FRP deck panels.”

Deck specifications called for design live loading of AASHTO HS-25 vehicle plus impact. An environmental durability factor was applied to material properties to account for degradation over time. “Like any material there is always a small degree of material scatter,” Reeves says. “We account for those deviations with statistical reduction factors.” Panel strain under full dead and live load was calculated not to exceed 20 percent of FRP’s ultimate capacity. Strain under dead load alone was not permitted by the client to exceed 10 percent. The deck system was designed for a minimum fatigue life of 2,000,000 load cycles. Thermal loading for panels accounted for a temperature differential of 100 degrees Fahrenheit. With L defined as the distance between the centreline of adjacent girders, deck deflection due to live loads plus impact was limited to L/500. “The relative stiffness of our fiberglass material makes deflection the driving factor in deck sizing with FRP,” says Reeve. “We analysed different loads and conditions, but the influence of deflection on sizing is greater than all other design parameters. Because of this unique aspect, FRP bridges and bridge decks are built to safety and strength factors much higher than that of conventional material.” The FRP panels, weighing just 5,000 pounds each, were delivered to the job site in sequential order. “With a truss bridge there isn’t room to navigate a crane,” says Reeve “FRP allows the contractor to start at one end of the bridge moving, positioning and setting the panels with nothing more than light equipment.”

Shear studs welded to the top of the beam connect panels. The FRP panels are then joined together by welding steel edge members. “This was a cold weather installation,” explains Reeve referring the joining method used for Rock’s Village. “Traditionally FRP panels are joined by adhesive bonding.” Following installation the deck received a polymer concrete overlay versus asphalt. Thinner and lighter, the overlay met bridge weight restrictions and helped minimize dead load. “As with any material, FRP included, reflective cracking of the wear surface is always a concern,” Reeve says. “With the polymer concrete overlay we recommended a control joint be used in the overlay surface and sealed, otherwise it may need to be redone if reflective cracking does occur. New polymer concretes are being introduced that offer higher elongation as a means of overcoming this problem which is inherent on all types of bridge decks.” 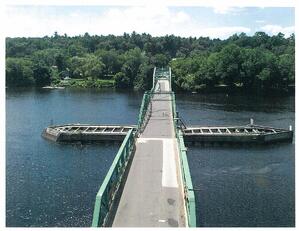 The Rock’s Village Bridge reopened in October 2013. “We inspected the FRP deck 18 months later and it looked good,” Reeve says.

Attached to deck; side and top

Steel plate expansion joints at ends of all six spans.