Posted by Composite Advantage on September 01, 2019

Originally published in the July/August 2019 issue of PileBuck Magazine here. 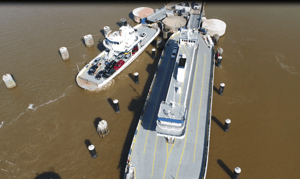 Perched on the banks of the Virginia's James River, Jamestown [Colony] is saturated with history. The Jamestown-Scotland Ferry system also has a storied past. The 60-ft Captain John Smith became the first vessel to carry cars across the waterway in 1925. Captain Albert Jester later sold his fleet to the Commonwealth of Virginia in1945. Today, under the management of the Vriginia Department of Transporation (VDOT), the Jamestown-Scotland Ferry is a toll-free service that transports approximately 900,000 vehicles a year. The "movable bridge" for State Route 31 connects Jamestown in James city county with Scotland Wharf in Surry County. It operates around the clock, seven days a week. Read more.