Posted by Composite Advantage on Mar 5, 2018 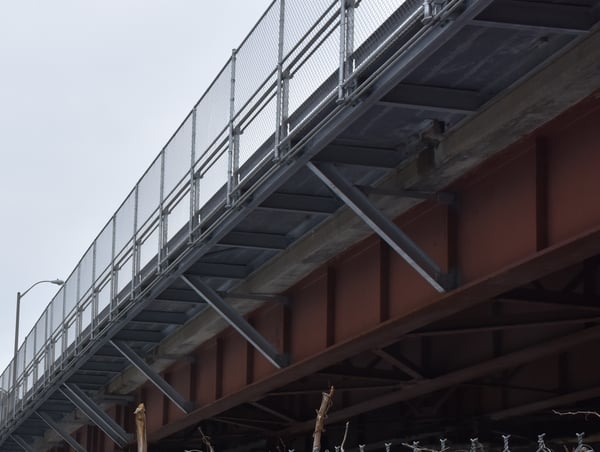 DAYTON, Ohio (March 5, 2017) When deterioration forced the State of New York Office of General Services (OGS) to close a downtown Albany pedestrian bridge walkway, the crew chose to replace bridge components and enlarge the sidewalk. The pedway supports daily foot traffic of nearly 700 state employees and links agency offices with parking. The OGS crew considered traditional concrete and lightweight concrete but both options proved too heavy for the vehicle bridge. And internet search led OGS to Composite Advantage’s Fiber Reinforced Polymer (FRP) FiberSPAN-C cantilever sidewalk system.The FRP composite pathway is the only product that provides pedestrian access without exceeding load capacity. FiberSPAN-C panels are 80 percent lighter than reinforced concrete panels. And because the cantilevered sidewalk is prefabricated, construction is quicker and installation costs lower. FRP’s corrosion resistance to chemicals and water means zero maintenance for a structure that will last nearly a century.

“The original structure had a concrete sidewalk 4 in. deep,” says Composite Advantage President Scott Reeve. “It took just six years for the sidewalk deck pans to rust and the concrete walkway to deteriorate beyond safe usage.  The new FRP design expanded the sidewalk without reducing the rating of bridge members.  When OGS approved the use of FRP, we were able to match the original sidewalk depth, yet modernize and expand the structure.

The FiberSPAN-C walkway was 763 ft. long and 64 ¼ in. wide. Deck thickness was 3 7/8 in. with 1/8 in. wear surface for a total thickness of 4 in. A non-slip polymer aggregrate overlay was applied by Composite Advantage’s factory to enhance pedestrian safety. The FRP sidewalk re-opened in November 2017.