A Rail Platform Case Study: How FRP Worked for the Chicago METRA Rail 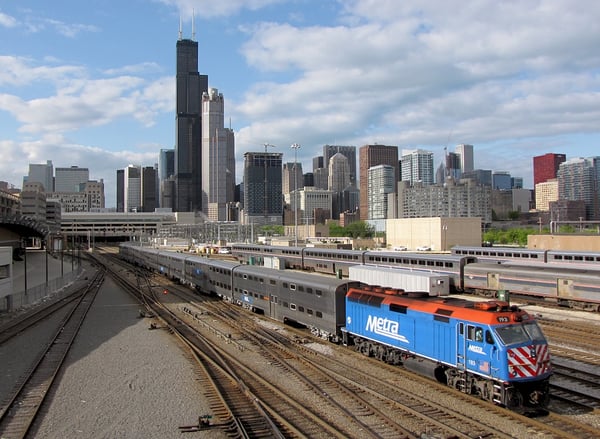 Railway infrastructure projects in the past were limited to just a few materials—such as wood, steel, and concrete—to create platforms for pedestrians and commuters. But over time, these materials no longer met the increasing weight and durability requirements of certain projects.

The Chicago Metropolitan Rail (METRA) consolidated several commuter rail lines in the mid-1980s, and nearly 40 years later, some of those stations are falling into disrepair. In April 2018, Chicago METRA announced their intention to upgrade and modernize several of these commuter stations, including the station in New Lenox, Illinois.

The New Lenox station was originally built in 1900 as one of many commuter stations along the rail line for the Chicago, Rock Island, and Pacific Railroad—a now-defunct Class I railroad. Ultimately, the station began to show the wear and tear of regular use and needed to be relocated to accommodate modern traffic needs and electric rail lines.

Struggling with several problems generated by a surrounding wetland area, loose soil, and sloping terrain, the New Lenox station required elevated rail bridges that could meet the curve of the existing rail while still remaining as light as possible. Ultimately, Fiber Reinforced Polymer (FRP) from Composite Advantage was chosen as the material to meet these challenges.

FRP consists of fiberglass, resin, and a core material product with a high tensile strength and increased design flexibility over traditional materials, allowing for variations in structure. Composite Advantage and Chicago METRA were able to design an FRP-based station that could overcome the challenges facing the project. Chicago METRA also found that FRP installs faster and easier than traditional rail materials, is environmentally resistant, and is still comparable in cost to traditional materials.

The new rail station, at 254 feet long, was created from 67 prefabricated panels, weighing only 400 pounds each. Despite sub-zero temperatures that might hinder more complicated operations, the installation took only three days and just three people to complete. Features of the new platform include:

As the New Lenox METRA station shows, FRP has proven itself a useful material for rail bridges and platform projects faced with hazardous terrain considerations, a need for lightweight material, and fast installation times.