A few weeks ago, during a few lucky days of warm weather, I visited Chicago, the railroad center of the nation. I was helping to conduct a five-year inspection of the FiberSPAN rail platform we supplied for New Lenox, a southwestern Chicago suburb. We installed the platform in December 2009 during a run of single-digit temperatures – luckily, prefabricated structures are fast and easy to work with in such cold climates!

So back to this week. I immediately noticed the following:

I walked its breadth and width feeling for any movement - and the structure was solid. Because we had bolted the beams to steel inside the panels (and used Threadlocker), the panels were still tightly connected to the underlying steel beams. Rail post attachments to the back side of the panels yielded no movement. Warning tiles were solidly bonded to the panels. The platform’s non-slip surface - the biggest maintenance concern to METRA - was also holding up well. 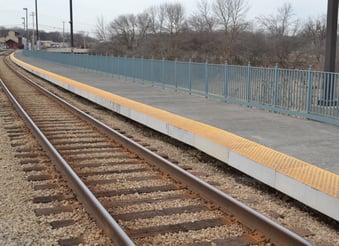 As I walked towards the platform, I was concerned with the wear surface. After all, this station serves over 2200 commuters each day. Pebbles and dirt from the rail bed (and winter boots) were spread over the platform near crossing points. The crush from traffic can leave these areas looking dirty. But close inspection showed the wear surface still has its rough grit coating, preventing slipping. The expanding foam seal between panels was still in place, preventing water from draining onto the support beams.

Two items were slightly the worse for wear. First, in 2009, the vertical faces of the panels had been coated with acrylic. Four of these 134 faces showed signs of degrading. That’s less than three percent, but our goal is zero degradation. (Hence the reason we began using polyurethane top coats a few years ago.) The second item was a decrease in wear surface thickness at three panel edges. These edges appear to be slightly higher (around 1/16”) than the adjacent panel so the high edge takes the brunt of the foot traffic.

The FRP platform was originally selected for the New Lenox station because METRA was attracted to its corrosion resistance and long life cycle. FRP’s light weight also minimized the size and depth of the station’s substructure, which borders fragile wetlands. Overall, I think they made a good choice and was pleased with the performance of the FRP platform. Information from these inspections helps us to continually improve our products, especially as rail station construction explodes around the US.

If you have any questions on FRP rail platforms, visit our resource center or drop us a line!