Santiago Calatrava: The man behind the bridges

Behind every bridge there are countless individuals who help to design, plan and build the finished product. Some of these designers have left a memorable mark on the world of architecture. Bridges serve as paths between two areas that would be otherwise difficult to reach. Although many bridges go unnoticed in our daily commutes, others define skylines and serve as tourist attractions and city trademarks. 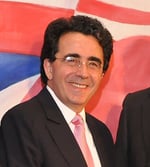 Santiago Calatrava is the man behind several of these innovative bridges. Born in Valencia, Spain, in 1951, Calatrava grew up drawing and sketching. He studied architecture in Valencia and engineering in Zurich, Switzerland. The union of these two fields played a critical role in defining Caltrava’s signature style.

After completing his education, he set up an engineering and architecture firm in Zurich and began designing buildings, train stations, and other structures. In 1987 Calatrava’s first bridge was completed after three years of work in Barcelona, Spain. The 420-foot-long Bac de Roda Bridge carries both vehicles and pedestrians over over a set of train tracks. The through arch bridge is constructed of steel and concrete and is painted a bold matte white color. This bridge was the first of many Calatrava creations.

One of the most notable is the Alamillo Bridge located in Seville, Spain. This cable-stayed bridge relies on a single pylon which cantilevers the 650-foot span over the Guadalquivir River, allowing access to the island Expo center. The 460-foot-tall pylon is constructed of steel and reinforced concrete, and its weight balances the load of the bridge, which is connected to it by 13 pairs of cables. 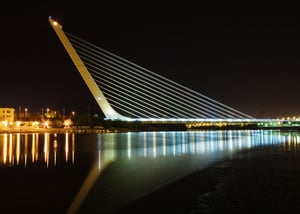 In the state of California, Calatrava designed what is known as the Sundial bridge. Its cable-stayed design follows in the footsteps of the Alamillo bridge, as it relies on cables from only one point to hold its 700 foot span and deck made of granite and glass. At night the deck is illuminated from underneath, making it a notable landmark at all hours of the day. This bridge was also designed to function as a working sundial; as its shadow tracks across the grounds of the surrounding arboretum.

Calatrava’s style combines his mastery of both engineering and architecture, stretching the limits of bridge and structural technology. The sweeping curves and sparse frames of his structures often resemble natural elements and living creatures. For example, his Turning Torso tower in Sweden resembles a spinal cord, and other buildings look like the spreading wings of a bird. His other works can be found across the globe, from his home town of Valencia, Spain, to Milwaukee, Wisconsin.

Take a look at other examples of Calatrava’s art, architecture and bridges at https://calatrava.com/,