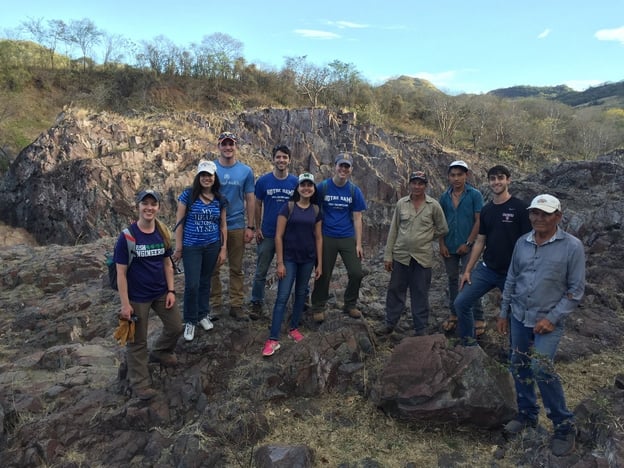 NDSEED, a Notre Dame engineering organization with the goal of bringing pedestrian bridges to underdeveloped rural communities in Central and South America, is once again preparing to complete a bridge in Nicaragua this summer. The group of 8 undergraduate traveling members, varying in age from sophomores to seniors, were in Nicaragua for a week during January to survey the site and speak with contacts in Managua about the summer implementation trip.

The community of Las Pencas, about three hours north of Managua between the cities of Sebaco and Leon, is situated on the Rio Viejo Santa Barbara. This river makes it difficult for the Las Pencas community to access cities such as Leon and Sebaco which have the closest grocery stores, upper-level schools and hospitals. This summer's bridge project is planned to be over 110m long, making it the longest bridge NDSEED has ever set out to construct.

This spring, the NDSEED team has been busy completing review documents and calls with our parent organization, Bridges to Prosperity, along with fundraising. This year, Composite Advantage has been kind enough to help support NDSEED with a $1,500 sponsorship. Each bridge project totals about $60,000 which goes toward Bridges to Prosperity, the mason, transportation to Nicaragua, lodging and food during the survey and implementation trips.

To learn more about NDSEED and to see some cool footage from the bridge build last summer, watch this video that was recently made for the ND Day fundraising effort. If you'd like to help support our cause financially, you can learn about how to donate on our website, here.