Consider the “Thanks” in Thanksgiving 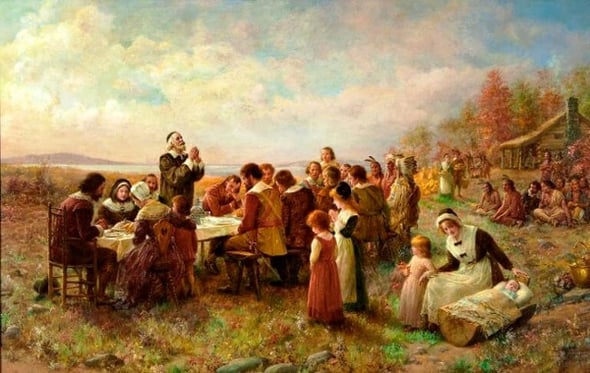 This week Americans celebrate Thanksgiving. And like so many have said, it’s going to be a little bit different. A friend of mine has an interesting tradition that she started with her children and now continues with her grandchildren. Though she’ll have to do it long distance this year via Zoom, the “rule” at grandma’s house is that family members must listen to a few minutes of history before they eat. She directed me to WallBuilders, an organization dedicated to presenting America’s forgotten history with an emphasis on the moral and constitutional foundations our country was built on.

This year is the 400th anniversary of the Mayflower voyage and the founding of the Plymouth Colony. The Pilgrims—Protestants who did not want to join the Church of England—travelled to Holland seeking religious freedom and then obtained a land grant for Virginia before boarding the Mayflower on Sept. 6, 1620. Rough seas pushed the ship to the shores of Massachusetts and Plymouth Rock, some 200 miles north of Virginia on November 11, 1620. A grueling winter quickly whittled the group down to just 50 Pilgrims. Enter the Wampanoag. Tribe members Samoset and Squanto helped the Pilgrims learn how to live in their new home and helped to establish a peace treaty between the two groups. Despite a harsh beginning, a bumper first harvest brought the Pilgrims and the Wampanoag together in a three-day festival to give thanks to God, enjoy fellowship and competitive games. The event was America’s first Thanksgiving.

George Washington issued a proclamation that named November 26, 1789 the first national day of thanksgiving to recognize the “role of providence in creating the new United States and federal Constitution. On October 3, 1863 President Abraham Lincoln announced an official Thanksgiving holiday for November 26, 1863 as an expression of gratitude in part for a “pivotal Union Army victory at Gettysburg.” President Franklin D. Roosevelt signed a resolution on December 26, 1941 that established the fourth Thursday in November as the Federal Thanksgiving Day holiday. Just weeks earlier, 353 Japanese bombers attacked the United States naval base at Pearl Harbor on December 7, 1941.

When I consider these events, I see a pattern emerging of people who found the strength to give thanks in the midst of extreme difficulty. Taking a look at the past is an encouraging reminder that the tough times we are experiencing now with COVID-19 will pass. This Thanksgiving may be a bit different but the ability to find things to be thankful for is not. We’re thankful for you and wish you and yours a happy Thanksgiving.