Since May, we’ve been reporting on the progress of a trail bridge installation in Phillips Park, Beavercreek, near Dayton, Ohio. First, we gave some project background. Next, we walked step-by-step through the install. In the third blog we summarized installation progress.

Also in the third blog, we mentioned that the Phillips Park trail bridge is engineered to withstand uplift force in the event of a 100-year flood. Last week, we came close to testing this design feature when an unexpected high volume of rain hit, causing some flooding. As soon as it was safe to ford the swollen creek, I headed out to do an inspection.

I waded through about two feet of water to see how the bridge held up. Key observations include:

So, after only one month, most of the bridge’s design characteristics have already been tested - and the bridge passed! 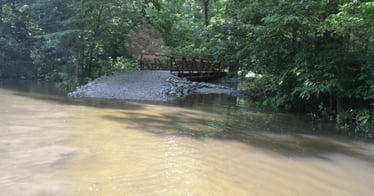 The Phillips Park bridge is 45-feet long and 6-feet wide. With structures longer than 40 feet, FRP is the more cost effective and functionally simpler choice – especially when switching from an FRP bridge superstructure to a steel truss configuration with an FRP deck. To minimize maintenance costs, we prefer weathering steel with a 3.5-inch FRP deck. The lightweight deck allows us to fully assemble the bridge and quickly erect it on the abutments. The bridge was designed to meet or exceed the standard specification for a uniform load of 85 psf as well as a maintenance vehicle.

A quick word on the design versatility of this strong, lightweight FRP deck. The style and color were selected to mimic wood, while the non-slip wear surface has seams to simulate gaps between wood planks. The rich brown color looks great with the weathering steel. Because two long deck panels were used, there is only one gap over the bridge’s entire length. Finally, the integrated solar lights provide soft illumination for those using the park at dusk.

Want more info on the durability and versatility of Composite Advantage trail bridges and bridge decks? Get in touch!