How To Pick The Right Surface 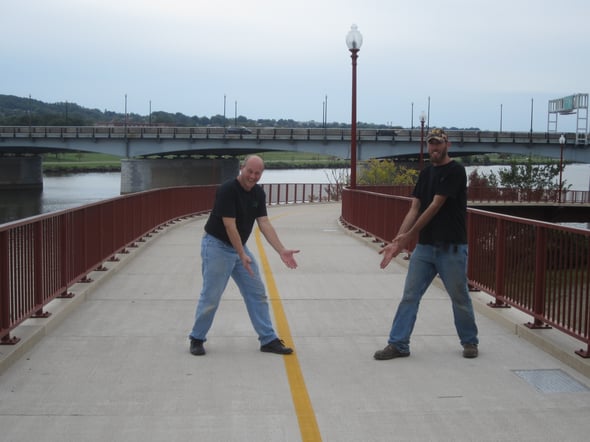 In my business I talk a lot about selecting the right surface for people to walk and run on. And not because my favorite sport, American football, is so dependent on the playing surface, whether it’s grass, ice, mud or artificial turf.  But because of the ever-increasing number of individuals that use outdoor trails and paths.  Finding the right surface is also the question I get asked most often when I talk with owners and engineers who are striving to deliver the best bridges possible for connecting trails, parks, commuter paths and transit stations.

For years, starting with the first pedestrian fiber reinforced polymer (FRP) bridge installed in 1996, suppliers typically used an epoxy grit overlay. Widely available, easy to use and relatively economical, this commercial product has found its way into everything from factory floors to commercial ship decks and flight decks for aircraft carriers. As FRP gained acceptance and was adopted for use in larger cities with higher traffic, these products wore down quickly. After re-surfacing a few of these decks, we conducted an extensive evaluation of six different commercial systems. The results of our study helped us identify a polymer aggregate system consisting of a polyurethane methacrylate (PUMA) that can accommodate a variety of aggregates. The system was first introduced in Europe in 2005, before gaining popularity in Canada. Today PUMA is the preferred non-slip surface for North America.

So let’s get down to the nitty-gritty of how to pick the right surface for the job at hand. In this case, I am defining “right” as a surface that is safe for users, aesthetically pleasing and has long term durability to optimize value for bridge owners.


Depending on your application, there are a lot of overlay products to choose from. But years of testing and experience have eliminated the guesswork, making it easy for bridge owners to match their surface requirements with the option that is safest and most durable.