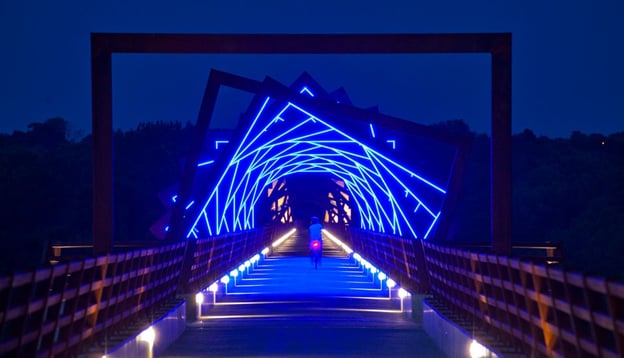 In the middle of the Des Moines River Valley, there's a half-mile trail bridge that connects 600 miles of trails in Central Iowa. The High Trestle Trail Bridge, as it's known, was reopened in 2011 as the fifth longest pedestrian bridge in the United States. It's not the length of the bridge that has gotten the world’s attention, however - it's the design. And the subject of our latest trail bridge blog.

To commemorate the region’s coal industry, the bridge incorporates steel cribs that resemble a coal mine shaft. Furthermore, the cribs are situated in an abstract manner to symbolize traveling through time and space. Blue LED lights were installed not only to allow nighttime traffic, but to also add a layer of beauty.

The bridge is often recognized as one of the world’s most unique bridges. Media outlets from the BBC to USA Today have deemed the High Trestle Trail Bridge among the most interesting bridges in the world. Even the economic impact has been apparent, as foot traffic averages 20,000 pedestrians per month.