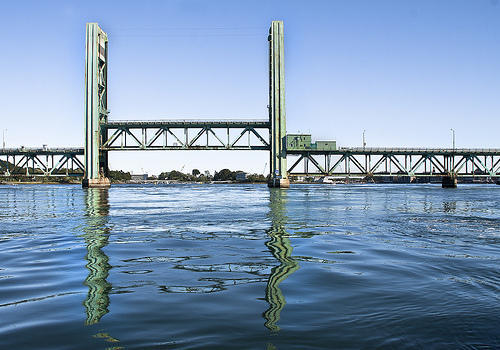 Since 1940, the Sarah Mildred Long Bridge has provided a link between the states of Maine and New Hampshire. The bridge was a project undertaken by the then-newly formed Maine-New Hampshire Interstate Bridge Authority. The Authority wanted to replace a river crossing that was built in 1822, introducing a more viable option for travelers from Portsmouth, New Hampshire and Kittery, Maine. Let's take a closer look.

Originally named the Maine-New Hampshire (Interstate) Bridge, it carried traffic on U.S. Route 1, with up to 14,000 cars traveling on the bridge every day. The bridge supported two decks, one for vehicular traffic and the other for a railroad.  It was renamed the Sarah Mildred Long Bridge in 1987 after a long-time Maine-New Hampshire Bridge Authority employee.

The most prominent feature of the Sarah Long Bridge is its lift span, which allows larger ships to sail down the Piscataqua River. However, the lift bridge with only two lanes of traffic put the bridge below interstate highway standards. In 2013, a tanker caused serious damage to the bridge’s structure, and in August 2016, the lift bridge was stuck in a closed position. By that time, the two states decided to demolish and rebuild the bridge to provide more clearance for ships and to build a more sturdy bridge that can last a century. The old Sarah Long Bridge was demolished in October 2016, and the new bridge is slated to open to traffic in October 2017.

We'll give an update in our next blog.