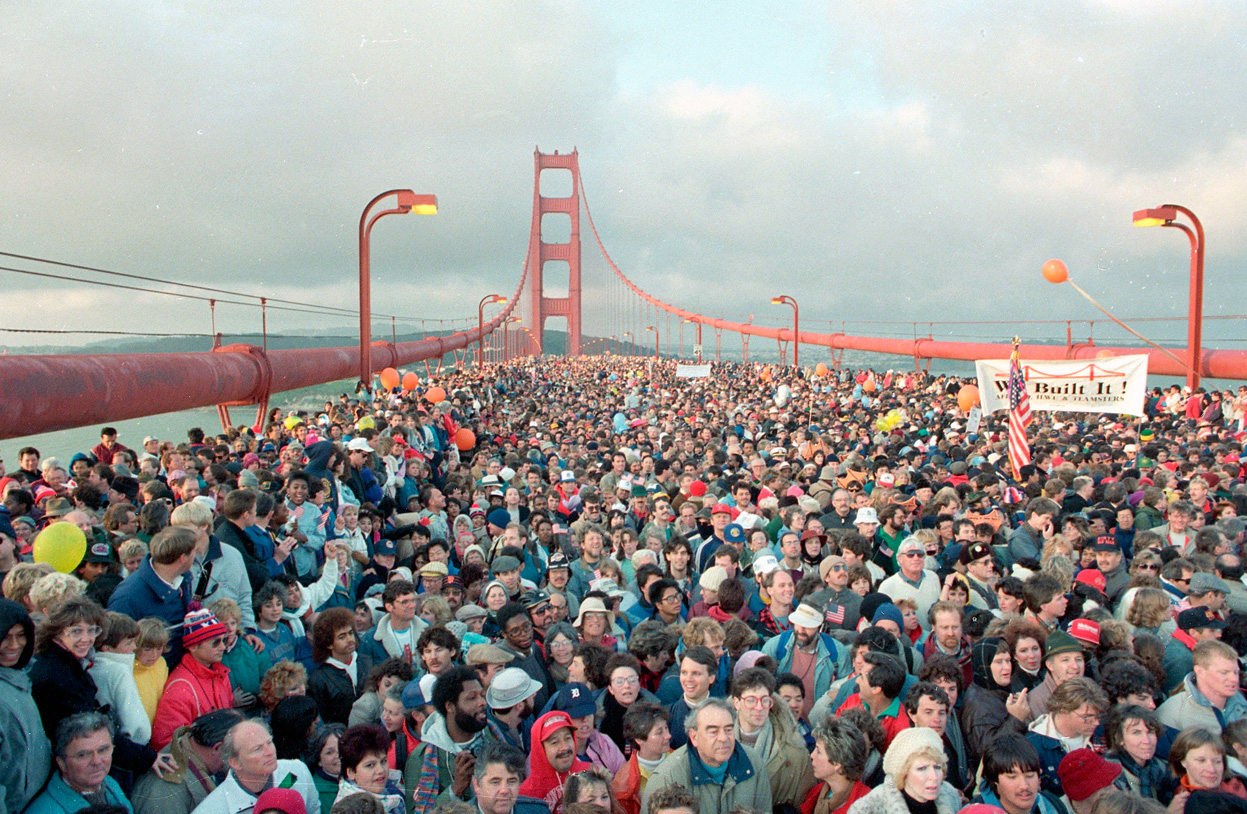 We design our bridges and decks to handle maximum vehicle weight. Walkers on a quiet park bridge might find it surprising how important it is to also design for a human payload.  That 18-wheeler freight truck may look big and heavy, but the combined weight of people who are crossing a bridge adds up quickly. Pedestrian bridges are drafted to specifications such as uniform loading which takes into account events that will pack the structure with people.  The AASHTO LRFD Guide Specification For The Design of Pedestrian Bridges currently calls for a uniform loading of 90 lbs. per-square-foot (psf). There is an illustration I like to use to make this concept more concrete. Both feet of a 180 lb. person take up one square foot.  The AASHTO specification is based on 180 lbs. divided by two [human feet] equals 90 lbs. per-square-foot.

AASHTO increased the requirement from the previous rating of 85 psf.  There are provisions for load reduction requirements for larger bridges.  In some cases, owners require 100 psf.  Northern states will sometimes add 25 psf for snow loads.  The highest pedestrian loading requirement that our team has designed for was a cold climate exterior rail platform that required 150 psf.

In these photos you can see the density of people for 100 psf and 150 psf loadings.

Pedestrian loading is important for FRP decks and bridges because the stiffness of FRP material is lower than steel and reinforced concrete.  Deflection limits usually determine FRP design thickness because people do not want to feel much “bounce” under foot.  FRP’s superior strength is comparable to that of steel. A result of the deflection-driven design; the composite material’s high strength safety factor —often more than 20 times the load—is an attractive feature of its material property combination.

A real world example of pedestrian loading occurred on May 24, 1987, when thousands of people descended onto the Golden Gate Bridge in San Francisco, California. The bridge opened in 1937. On its golden anniversary the city closed the span to vehicles to give pedestrians a chance to walk across the Golden Gate’s 1.7 mile length. Officials estimated that 50,000 people would attend.  Instead, nearly 300,000 people showed up.

To the shock of onlookers, the shape of the span began to change under the weight of the crowd. The suspension bridge’s signature arch flattened in the center. Officials realized this could be a problem and they weren’t going to wait for the results of technical engineering calculations to see if they were right.  They quickly closed the bridge to visitors. As the bridge began to clear of people, its’ span gradually returned to its normal shape.

The bridge had deflected seven feet. Bridge engineers later determined that this was normal and that the bridge was never in danger of collapsing.  The bridge was constructed to withstand a capacity of approximately 5,700 lb. per ft. with additional safety factors accounted for.

If we do the math, the Golden Gate Bridge’s roadway is 62 ft. wide with sidewalks that are 10 ft. wide. In other words, 5,700 lb. per-square-foot capacity translates to 70 psf.