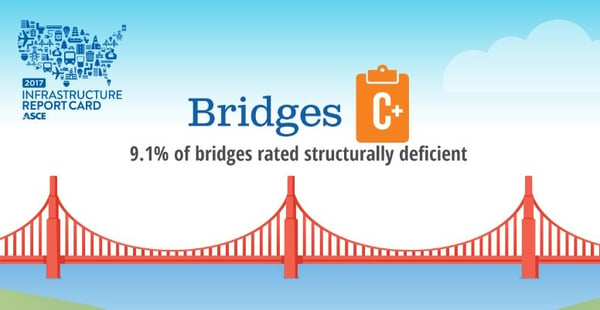 America’s infrastructure scored a D+ in 2017. The grade was compiled by the American Society of Civil Engineers. Twenty-eight dedicated civil engineers pored over data and reports, talked with technical and industry experts and assigned grades based on criteria that included capacity, condition, funding, future need, operation and maintenance, public safety, resilience and innovation. The results of the ASCE’s work have been widely publicized. The bridge statistics the organization uncovered got buried by the headline so bear repeating. They set the stage for recent news about how smart sensors are being used to monitor bridge structures and how materials like FRP composites are helping engineers build better bridges faster.

Structural health monitoring of bridge structures is more relevant than ever these days. Strain gauges have been used for more than two decades to tackle the job but the method hasn’t proved to be a long-term solution.  The need to “observe” and track performance variables on these hard-to-reach spans has prompted some to look at new ways of doing that. Wireless structural health monitoring with small, low-cost sensors is one method that has emerged. The wireless sensors are capable of collecting data on variables like load conditions, deformation, excessive vibration and crack development and growth.  Another approach, borrowed from the aerospace industry, is testing comparative vacuum monitoring sensors. The devices are able to detect cracks smaller than the thickness of a dime.

Because the sensors monitor a structure in real time, they can alert engineers to the presence of a crack before it becomes a problem. In addition to proactive repairs, the ability to respond to input immediately improves safety and can prevent a bridge from becoming a choke point for traffic.  Advanced materials also have a role to play in helping to rebuild the nation’s infrastructure. Corrosion-resistant, maintenance-free Fiber Reinforced Polymer (FRP) composites offer an attractive choice for infrastructure applications ranging from bridges and bridge decks to repair and retrofit and internal reinforcement for concrete.

FRP composites are an engineered material. Polymers support and protect  high-strength fiber reinforcements from corrosion and the effects of environmental factors such as salt water, deicing chemicals, oils, acids and UV radiation.  One of the oldest FRP decks was installed in 1996 on a bicycle path in Ohio where it has been exposed to snow, ice and cold temperatures for more than a decade. Regular inspections have found the deck surface damage free.  Smart sensors and FRP could be the one-two punch engineers need to begin tackling the long to-do list for bridge rehabilitation.