Tacoma Narrows Bridge: Why We Use Wind Fairings 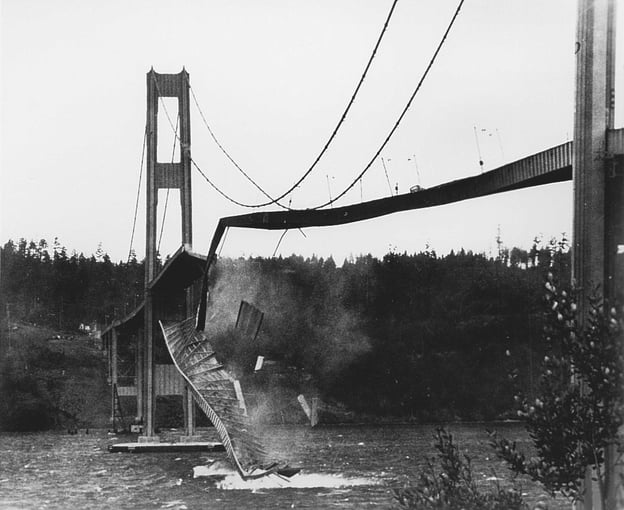 November 7th, 1940 is a day that changed the course of bridge engineering (as well as the study of aerodynamics) forever. That day, the Tacoma Narrows Bridge in Tacoma, Washington began to sway violently. A physical phenomenon known as aeroelastic flutter caused the bridge to sway both vertically and horizontally for about an hour. At around 11:00 a.m. the Tacoma Narrows Bridge collapsed after the structure failed in the face of 40 mph winds. Only one life was lost, a cocker spaniel belonging to the lone driver on the bridge when it began to sway. Ever since, engineers and bridge owners have invested more time and money on new technologies to prevent another bridge collapse.

The Tacoma Narrows Bridge opened in 1938 after only 19 months of construction. Designers and builders expected light traffic on the bridge, and therefore only included two lanes of traffic. Very narrow girders were used to support the roadway. With such a shallow structure, moderate to heavy winds were able to sway the bridge very easily. In most cases, the central portion of the bridge undulated several feet in five second intervals. Soon, the builders and the public would nickname the Tacoma Narrows “Galloping Gertie,” due to its tendency to sway.

After some ill-fated attempts at reinforcement, the Washington Toll Bridge Authority hired Frederick Burt Farquharson to study the bridge. He came back with two possible solutions: Drill holes into the girders to allow air flow through the bridge, or install triangular fairings to deflect the wind. Unfortunately, this study came out days before the bridge collapsed. After the collapse, many researchers and engineers concluded that braces and fairings should be used to limit the impact of wind. Many bridges were modified, like the Bronx-Whitestone Bridge, or built with fairings, like many suspension bridges today. A tragedy nonetheless, the collapse of the Tacoma Narrows Bridge is a lesson in structural safety.