The Bridge Keeper is No Troll 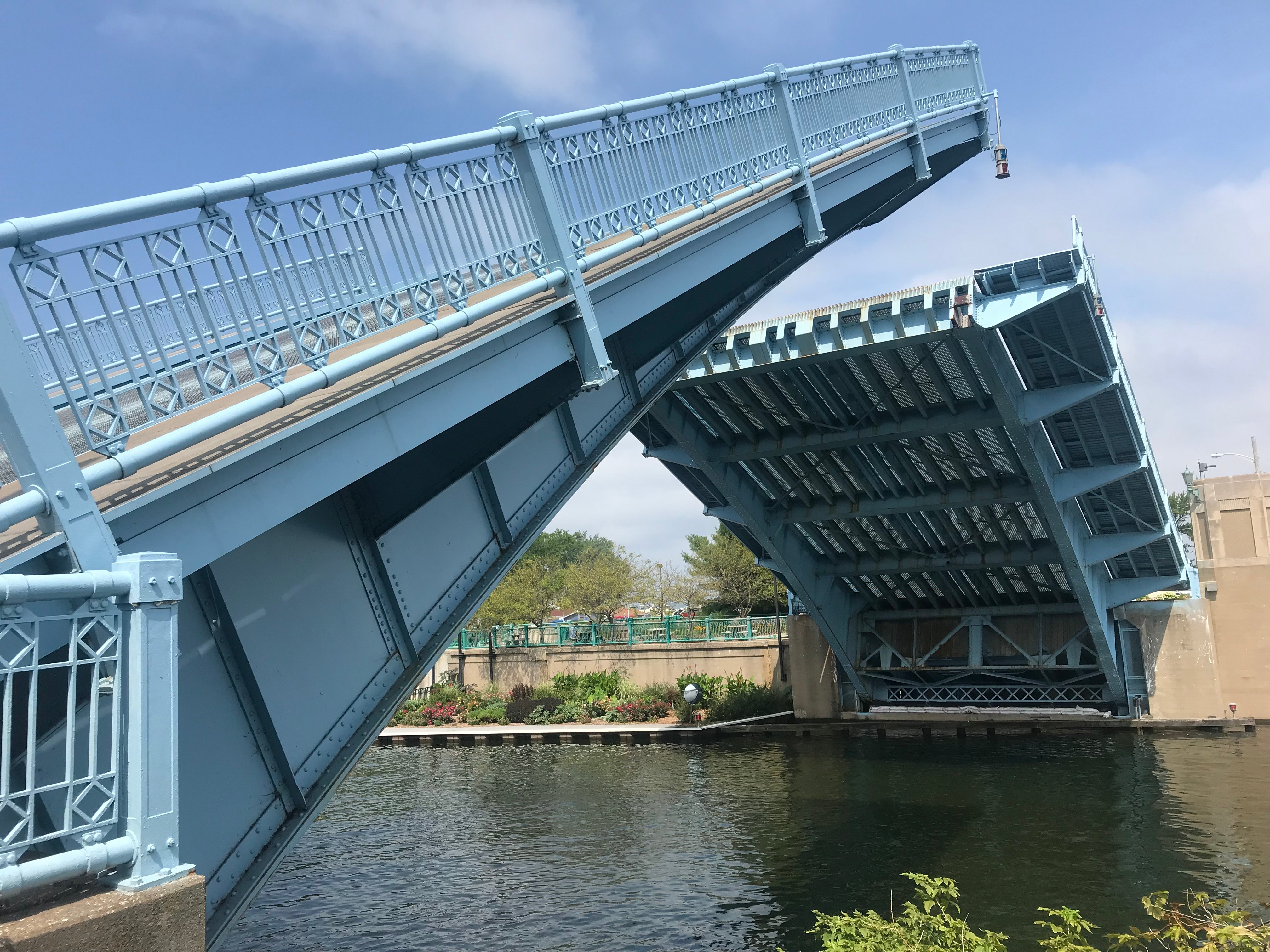 One of our most recent projects was a vehicle bascule bridge in Michigan City, Indiana. It was a job Composite Advantage did not anticipate. An emergency arose when the bridge, which is over a river that flows into Lake Michigan, suddenly stopped functioning after the concrete deck and steel supports in the bridge failed under extremely cold weather conditions. This caused a major blockage of boats, as well as the hundreds of cars that rely on that bridge for their everyday routes. It was a major inconvenience for everyone in the community. Within days of the bridge closure, the repair contractor contacted CA for a fast solution.  Prefabricated decking that drops into place is a huge benefit.  The original repair concept called for temporary steel plate until the weather was warm enough to implement a permanent repair requiring 28 days for concrete to cure.  Two repairs and two shutdowns were avoided using the FRP decking.  Two large panels; one for each end were designed, manufactured and installed on-site in 32 days.  This is extremely fast for an infrastructure project. 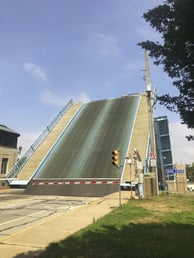 I recently stopped by Michigan City to see the bridge for myself. When I was there, I had the pleasure of running into the bridge operator in the middle of his busy work day. It was a great opportunity to extract more information about the project, as well as a great conversation with a very nice man, who chose to remain anonymous.  The bridge operator sits in a tall tower that is at the left end of the bridge. Looking at the tower, with the mysterious tinted windows, and fairy-tale- like tone, I was not even aware there was anyone in the tower at first. In an “Oz-like” moment, I then saw him sitting at the bottom of the tower and he engaged in conversation; curious about what I was doing.

I asked him multiple questions and he told me about how he has been the bridge operator since March, and has enjoyed his time there. The bascules of the bridge go up precisely a quarter before and after the hour, and they are open for approximately seven minutes. The process is manual and takes a large amount of precision, patience, and skill to correctly line up the teeth of the bridge. In a series of hand gestures and technical talk, he explained how he uses a reference point to guide them up and down.  During the 30 minutes when he is not in the tower, he sits on the steps at the bottom of the tower and interacts with the local pedestrians. In addition to a cell phone, there is also a timer constantly in his pocket to ensure he doesn’t miss any interval, even if he is caught up in a conversation.

There are three 8-hour shifts, so operators work 24/7. The first shift starts at 6 a.m. and ends at 2 p.m, which was his shift. The second shift starts at 2 p.m., and ends at 10 p.m. And you guessed it, the third one starts at 10pm and ends at 6 am. Besides raising the bascules, the main part of his job is to make sure everyone is safe. The bridge operator also acts as a babysitter, police officer, and a groundskeeper. “It has to be done, and if you are going to do it then give it 100 percent and make sure it is done right,” he says. “I just have to do what is right to make sure people’s lives can function properly. You do what you love because you are passionate about it and my passion is keeping people safe.” The shifts normally go smoothly, with the exception of the occasional incident. A few weeks ago, there was a car trying to drive onto the bridge as it was rising causing it to slide backward down the bridge. No one got hurt, except the car when it slid down the steep incline into the gap between the bridge and the abutment.  Another recent incident happened when someone chose to jump over the bridge (out of inebriation, not intention) and was greeted by police officers waiting for him on the river bank as he was swimming out. You never know what will happen on a bridge! If you'd like more technical information on the Franklin Streeet Bascule bridge you can find it here.

Check out our movable bridge infographic! 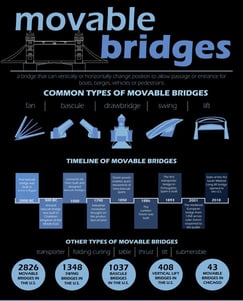