The Long And Short Of It: Covered Bridges Of Northeast Ohio

I recently traveled to Ashtabula County in northeast Ohio. The original settlers in this section of Ohio brought the quaint covered bridge architecture with them from New England. At one time, there were over 200 covered bridges in this area; today there are less than 50. Some are historic, some are restored and some are replicas; all add charm to the landscape.

According to the Federal Highway Administration,

Most of America's covered bridges were built between 1825 and 1875. By the 1870s, most bridges were covered at the time of construction. The original reason for the cover was to protect the bridge's trusses and decks from snow and rain, preventing decay and rot. The cover served other purposes also-it kept horses from being spooked by the waters underneath, it was a reprieve from weather to the weary traveler, and it was used for political rallies, religious meetings, a night's sleep for tramps, town meetings, poker parties, sweethearts' rendezvous, drunken revels, dances, and even rainy-day luncheons took place on the covered bridge. An uncovered bridge would last approximately 20 years but a covered one could last 100 years.

One northeast Ohio deconstructed covered bridge was divided into two parts, carefully reconstructed, and today each half is home to a pizza parlor! This is a testimony to the enduring appeal of the covered bridge. Whatever the reason – a fascination with bridges, the uniqueness of the covered architecture, or a desire to connect with a bygone era – covered bridges continue to lure visitors to this corner of Ohio to experience their distinct charm. Here are a few notable examples. 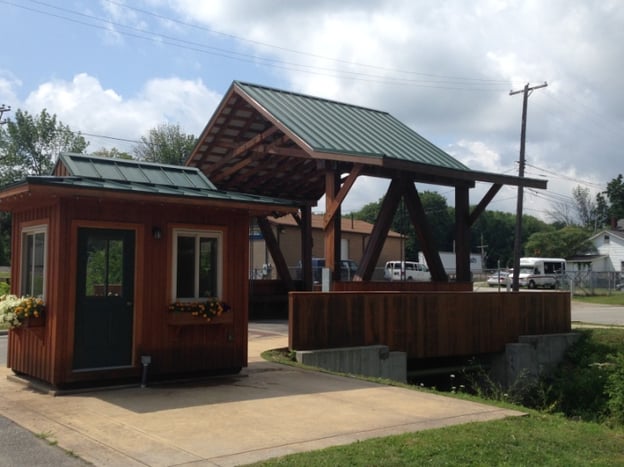 Open to vehicle traffic in 2010, the tiny Liberty Street bridge in Geneva, Ohio, is a modern tribute to the covered bridge with a one-of-a-kind design. The structure is supported by a single Kingpost and its roof is a Scissor Truss, which was intended to give a more open, lighter feel. The replica toll booth is to remind visitors of pioneer days when it was typical to pay for the privilege of crossing a bridge. The bridge was modularly constructed of donated locally-grown timber by students at nearby Ashtabula County Joint Vocational School.

Touted as the longest covered bridge in the United States and the fourth longest in the world, the Smolen-Gulf vehicle bridge looms 93 feet above the Ashtabula River. Dedicated in 2008, its 30-foot clear width of Pratt Truss construction will support full legal load traffic. Structural design was by John W. Smolen, Jr.  and architectural design was by Timothy J. Martin, Ashtabula County Engineers. 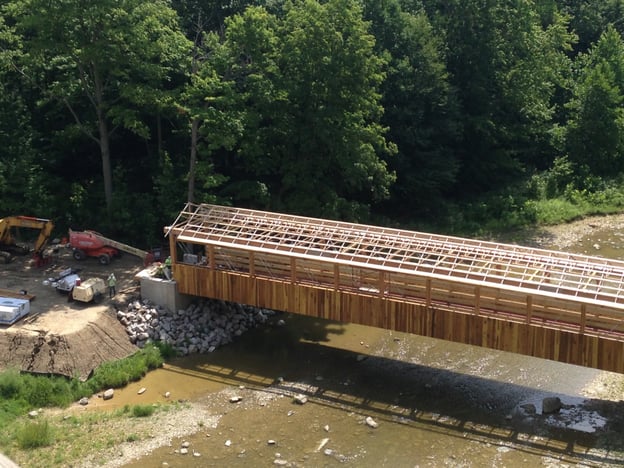 Approximately 70 feet below the Smolen-Gulf bridge, the Ashtabula Township Park Commission is expanding the current trail system of Indian Trails Park and adding a 14-foot wide covered pedestrian bridge. It mirrors the Pratt Truss construction of the nearby vehicle bridge and is being built by the same company that constructed the Smolen-Gulf bridge.

Ruth Reeve handles Human Resources for Composite Advantage, managing Payroll, Benefits Administration, and the always-interesting arenas of Personnel, Company Policies and Compliance. Ruth holds a Bachelor’s Degree in Electrical Engineering from Purdue University and in 2015 completed her MA degree from Franciscan University. In addition to being married to Scott for over 30 years, Ruth volunteers with various church and community organizations.