The Pedestrian Bridge with No Beginning and No End 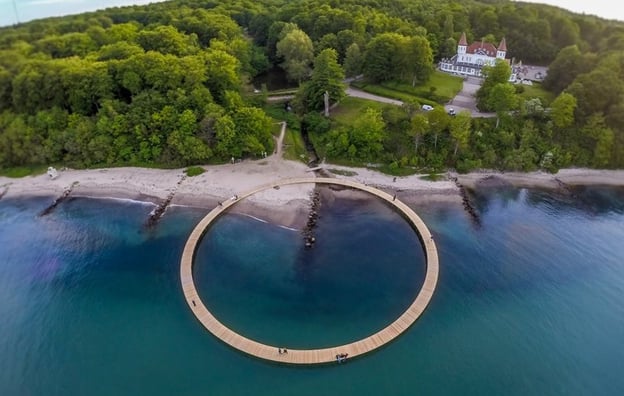 Have you ever felt like you were just going around in circles? If you were to take a stroll on the “Infinite Bridge” in Denmark, that's exactly how you'd feel - because that's exactly what you'd be doing.

Aarhus, Denmark's Infinite Bridge, or Den Uendelige Bro, was created in 2015 as part of the city’s annual Sculpture by the Sea festival. During this event, artists, architects and sculptors are given the opportunity to display their works at what is Denmark's largest outdoor art event.

The bridge was designed by Gjøde & Povlsgaard Arkitekter, with carpentry students from Aarhus Tech helping with the construction. They first built sections of the structure off-site, then compiled them into a single finished bridge (just like our pre-fabricated bridges and decks).  The circular bridge has a circumference of over 600 feet and a diameter of about 200 feet. The bridge overlooks forests, the ocean and the city of Aarhus, and stands on the site of a once-bustling jetty. A representative from Gjøde & Povlsgaard discussed the remarkable location elements of the bridge:

“From 1897 until World War II, steamships sailed from the town along the coast towards Riis Forest to the north and the Marselisborg woods in the south. Along that coast were a number of piers, including Varna Palace in the Marselisborg Forests, which was a popular destination among city residents. Sailing routes that linked the city, the bay and the characteristic woodland along the coast gave the city its special identity. The Infinite Bridge reestablishes contact between the coast and the gulf where the jetty at Varna Palace once was. From the bridge, visitors can experience the city, the forest and the bay like an endless panoramic composition that unfolds as one movement across the water.”

The wooden bridge does not have railings, so pedestrians are able to stick their toes in the shallow water or even go for a swim right from the bridge. Otherwise, visitors just might find themselves walking in circles.