The Real Cost of Using Concrete

American bridges are largely made of reinforced concrete, both precast and cast-in-place. Prized by engineers for its strength and low initial costs, it can be found in crossings across the country, from pedestrian overpasses in rural Montana to the George Washington Bridge in New York.

Like most building materials, however, concrete has some well-established disadvantages. In recent years, these drawbacks have caused engineers to reassess its benefits and consider alternative materials like fiber reinforced polymer (FRP). With the rise of such innovative materials, it’s becoming increasingly clear that concrete may no longer be the standard for bridge building in the United States.

Concrete has a well-earned reputation for versatility and durability. While it is well-suited to nearly any type of bridge, it has some major limitations that greatly shorten its service life.

Before it completely dries, concrete is usually surface finished to increase friction and prevent users from slipping while traveling on it. For pedestrian bridges and low speed vehicle bridges, this is a broom finished surface.  For higher speed vehicle bridges, this is saw cuts.  These finishes require frequent maintenance to ensure peak performance and can allow water and chemicals to attack the steel rebar inside.  This starts a continuous damage cycle of rusting steel and spalling concrete.  The costs of repairing spalling and sealing cracks begin to accumulate over time, quickly outweighing any savings that might have been gained from concrete’s low upfront costs.

Concrete bridges also decay quite quickly in certain environments. Since salt and water tends to corrode concrete, for example, any bridge located on or adjacent to a body of saltwater needs to be constructed with specialized concrete or chemically treated to counteract the effects of corrosion. In such circumstances, concrete can prove much less cost-effective than FRP, which offers high resistance to water, salt, and extreme temperatures.

Even with constant repairs and improvements, concrete yields a much shorter working life than many might expect. In fact, concrete generally lasts for no longer than 50 years, and sometimes lasts as little as 15 years. In contrast, FRP easily lasts for longer than 75 years, largely because it withstands environmental wear and tear so well.

About 9% of -- or approximately 56,000 – U.S. bridges were rated structurally deficient by the 2017American Society of Civil Engineers Infrastructure Report Card. Most of those bridges are made of standard concrete materials.

As its name suggests, precast concrete is poured off-site and transported to the site of the bridge for final assembly and installation. These transportation costs can further inflate the lifetime expenses generated by concrete bridges.

As you likely know, concrete is a particularly heavy material. While its mass accounts for its high strength, it also increases the cost of transportation, since several tractor-trailers are needed to move it to the worksite. Similarly, it needs to be reinforced with an extensive internal steel structure to ensure that the bridge will stand and function as designed, further raising the costs of labor

Just as importantly, concrete requires significant time and effort to install. In fact, a precast concrete bridge usually requires at least five days to assemble.  A cast-in-place concrete deck requires 28 days to cure and reach usable strength.  The prolonged project timeline and associated expenses make it a much less efficient investment than FRP, which can often be transported with far fewer tractor-trailers and be set up within a day or two.

Of course, the most persuasive argument against precast concrete comes from the data itself. We compiled a short table below to illustrate its financial costs from a recent case study in which precast concrete only survived 15 years before replacement. 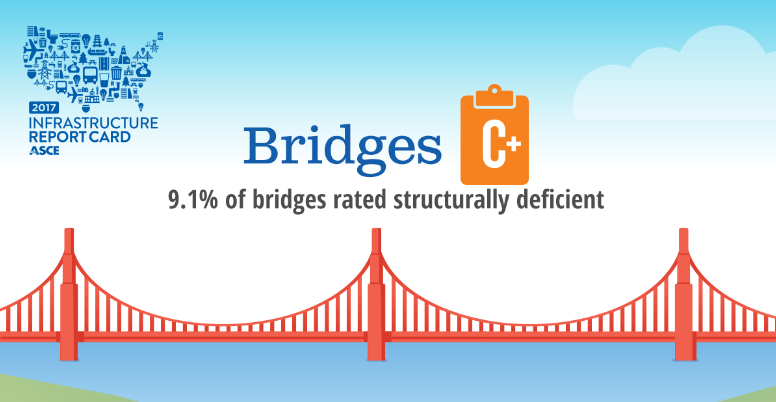 Over the course of fifteen years, a precast concrete platform cost an additional $55 for every square foot in comparison to a bridge made with FRP. A 5,000-square-foot bridge made of concrete, for example, would cost $275,000 more than a bridge of the same area made of FRP over this time span. Since each material performs equally well under loading conditions, it makes far more sense to invest in an FRP bridge than its concrete counterpart.

Concrete is a trusted material for engineers and infrastructure planners alike. In recent years, however, it’s become increasingly clear that a lightweight material such as FRP might be better suited to today’s bridges. If you’d like to see how they compare in greater detail, download our eBook, How FRP Weighs Up, today. 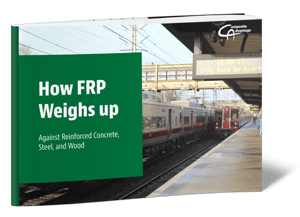