To Steel or Not to Steel: Act I

To Steel Or Not To Steel – That Is The Question.

At the 2015 Congressional Steel Caucus “State of Steel” Hearing, illegal dumping, currency manipulation and a string of industry layoffs and plant closures dominated the discussion. The number of cheap steel imports into the U.S. has risen sharply. This year alone, China is expected to produce as much steel as the rest of the world combined (though steel usage in China itself was only up one percent in 2014). Controversy over the Trans-Pacific Partnership trade deal prompted Leo Gerard, International President of the United Steelworkers, to say, “…our producers and workers are under siege from other nations’ massive overproduction, foreign currency devaluation, our own lack of long-term infrastructure investment and the strong dollar.”

The Infrastructure Jobs and Energy Independence Act was reintroduced on March 26, 2015 and assigned to a congressional committee. It details ways to fund critical construction projects without raising gas taxes or additional deficit spending. Many of these projects rightly call for a majority of materials to be domestically sourced. The demand for use of domestic steel has opened the door for another material option – Fiber Reinforced Polymer composites. 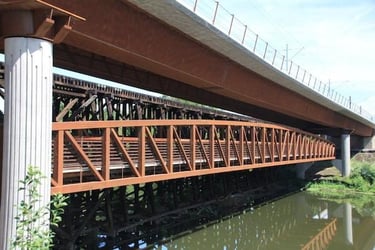 Take the case of Tri-Met, a bus, light rail and commuter rail transit services provider in Portland, Oregon. Their new expansion plan called for a lightweight clear span bridge with no intermediate support, weathering steel and a solid deck capable of supporting bicyclists and pedestrians. Big R Bridge, a Greeley, Colorado-based supplier of prefabricated bridges and custom engineered projects, found that the bridge’s 234-foot length required hollow structural section steel (HSS) with an outer dimension and wall thickness too large to be sourced from a U.S. mill. Available steel tubing 12-inch x 12-inch OD and 1/2 inch-thick couldn’t support the weight of a concrete deck and still meet a clear span requirement for that length.

Big R Bridge found a solution with FRP composites. FiberSPAN deck panels were (and are) light enough that available domestic steel tubing could be used for the long span. Seven panels were shipped to the Big R Bridge facility for assembly and installation on the weathering HSS truss section before being transported to Oregon. At the work site, a two-day installation with a lightweight crane had TriMet convinced FRP composite material was the right choice.