Our Nation's Waterways by the Numbers 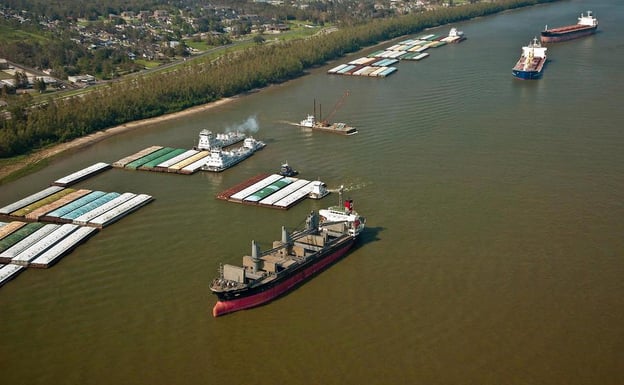 A new research report from Global Market Insights forecasts the global barge transportation market will reach a shipment volume of 12 billion tons valued at $170 billion by 2024. Barge capacity is expected to drive this growth. One barge can carry 1500 tons at once, outweighing the load capacity of railcars or trucks. At their current capacity, it would take 58 semi-truck trailers to move a load equal to that of one barge. An uptick in demand for petrochemical shipments and crude oil is expected to boost the market, but dry cargo will make up the bulk of the cargo. Dry products will include municipal wastes, recyclable materials, farm products, coal, ore, steel and lumber. Let's take a closer look.

America’s rivers have provided a transportation network for these types of goods and commodities for centuries. In addition to promoting commerce, these waterways support national security and public recreation. The Mississippi River is the second most productive river transportation system in the world, connecting more than 12,500 miles of inland waterways. The lower Mississippi River is the largest port complex in the United States, providing access to 31 states, with a deep-draft shipping channel that's more than 250 miles long. Approximately 500 million tons of cargo is shipped each year via this water “highway” with an estimated 80 percent being funneled to the Midwest.

The Mississippi River dredging project will deepen the ship channel between the Gulf of Mexico to New Orleans and Baton Rouge, expanding shipment size and strengthening freight movement. For example, grain vessels with a 50-ft. draft could carry an additional 25,725 metric tons. The engineering report on the project is expected to be complete by spring 2018.

Also noteworthy, the Ohio River Basin, which touches five states, covers 204,000 sq. miles east of the Mississippi. The Ohio River [981 miles long] carries the largest volume of water of any of the Mississippi River tributaries. If one adds the Ohio and Missouri Rivers to the main stem of the Mississippi, the combination places the river system fourth in length [3,710 miles] compared to other world rivers. The Mississippi-Missouri River combination is exceeded only by the Nile [4,160 miles], the Amazon [4,000 miles] and the Yangtze [3,964]. There are 12,000 navigable river miles in the U.S. The U.S. Army Corps of Engineers (USACE) maintains and operates more than 200 navigable lock chambers to maintain proper water depths for safe navigation. Maintenance is a key component to uninterrupted operation.

Fiber-Reinforced Polymer (FRP) composites offer an effective alternative to keeping ships and barges moving and protecting the investment that will be made in rebuilding the infrastructure. Currently, more than half of the approximately 87,000 locks and dams in the U.S. have exceeded their service life. Wicket gates, traditionally made of wood with a service life of 15 years, are used to raise and lower water levels.

In 2014, Composite Advantage designed and fabricated three 16 ft. long, 4-ft. wide, 8-in. thick FRP wicket gates. Testing proved the composite gates’ performance was superior when compared to wood gates. The product also offers a sustainable option to that of old-growth hardwood, a limited resource. The FRP gates, the first in the United States, were installed in 2015 at the Peoria Lock & Dam on the Illinois River at Creve Coeur, Illinois. Savings in materials and labor over the span of 50 years are substantial as FRP acquisition costs are lower than wood.