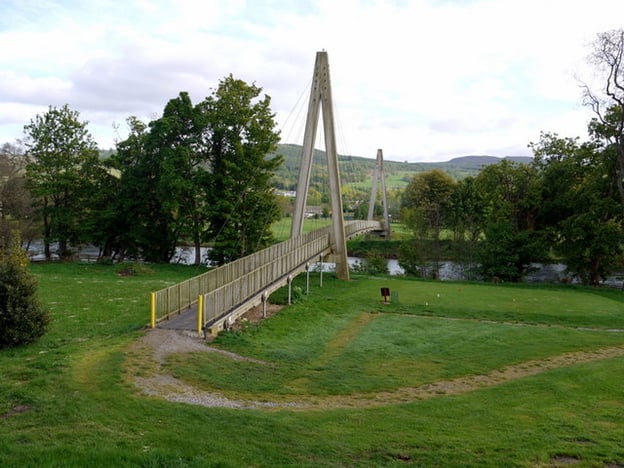 It’s been said that necessity is the mother of invention. Such was the case in 1992 with the Aberfeldy Footbridge in Perthshire, Scotland. You might be thinking I’ve gone a bit “mad rocket” [Scottish slang for crazy] to mention a 25-year-old span tucked away in the Highlands, but this bridge definitely merits a blog or two.

It's the first of the year and the Aberfeldy Footbridge is considered the world’s first major project using Fiber Reinforced Polymer (FRP) composites. And this milestone bridge's 25th birthday in 2017 is worth celebrating.

Let's look at some background on the project. Interestingly, involved parties didn't choose composites based on the merits of FRP’s performance over traditional materials - there just wasn't much data available yet. Instead, their choice was driven by an urgent timeline and the need for an affordable solution.

Back in the early 1990s, Aberfeldy Golf Club wanted to double the size of its small nine-hole course. They had the land, but it was across the River Tay - hence the need for a bridge. The nearest existing crossing, a narrow, 18th century stone bridge, was in no condition to carry golfers and their equipment.

The club turned to Dundee University Professor Bill Harvey for a solution. Harvey assembled a team comprised of designer Maunsell Structural Plastics, contractor O'Rourke and several final-year university students. The team overcame budgetary and structural limitations with their groundbreaking design, also known as the Linksleader Project. The 112-meter bridge opened in September 1992, taking the title of the longest FRP span bridge in the world.

While the Aberfeldy Footbridge may no longer be the world's longest FRP bridge, its distinction as the world's first major composite bridge ensures its place in history. In a forthcoming blog, we’ll highlight a University of Edinburgh report entitled "The Condition of the Aberfeldy Footbridge after 20 Years in Service." It details the challenges the Linksleader Project team faced and improvements that have emerged since. The lessons the team learned retain their value more than two decades later as they led to innovations in quality and durability. Until next time - fore!