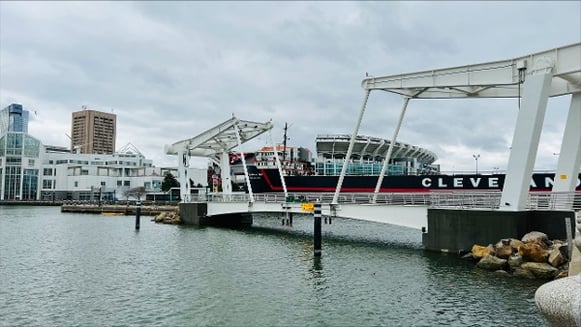 "Typically these bridge are constructed with a steel grid deck," says Matt English, structural division project manager for The Ruhlin Company. "But you can't put too much weight on a movable bridge. It has to maintain balance. Lightweight, corrosion-resistant FRP panels also allowed us to use smaller gears, motors and counterweights to pivot and open the spans for river traffic."

Performance criteria called for a uniform pedestrian live load of 90 psf, a vehicle maximum load rating of 8,000 lb. [wheel load], and a wind uplift load of 20 psf. Other requirements included Class II fire resistance and a deck operating range of -40 degrees Fahrenheit to 160 degrees Fahrenheit. To streamline the drawbridge function and reduce the need for complex joints and connections, two large FRP panels [one for each side] were prefabricated with curbs, drainage scuppers and a railing attachment. Each panel was 51 ft. long and 13 ft., 8-in. wide. Deck thicknesses ranged from 7.5 in. to 8.75 in.

English worked with CCG to design the tight tolerance bolted connections that attached the FRP panels to the steel superstructure. "We had to install the connections from a boat and ensure there were no gaps," he says. "Pre-drilled holes for the stainless steel railing worked out well as did the walking surface. CCG recommended its hybrid non-skid technology system which has been so effective that the city of Cleveland decided to add it to the surface of the structure's concrete approaches. The product originally specified wouldn't have held up under the bridge's high traffic volume."

Creative Composites Group (CCG) supplies innovative Fiber Reinforced Polymer (FRP) products for major infrastructure markets. Whether a job calls for tight tolerances or robust, very large structures, CCG has the design-build and structural fabrication expertise to provide engineered systems and OEM solutions. The Group’s combined team of engineers and technicians have been developing lightweight, durable, cost-effective FRP products for structurally demanding applications and corrosive environments for more than 50 years. Many of these products have paved the way for first-time use of engineered FRP composites for demanding infrastructure markets including: utility, rail, bridges and waterfront applications because of FRP's high-performance attributes.