Meet The Longest FRP Composite Clear-Span Bridge In The World

In the early 1900s, cars were banned to preserve the island’s peace and quiet. As an alternative, The Bermuda Railway built 33 bridges and trestles to support a 22-mile rail line. The train carried passengers and freight from 1931 to 1948 before it closed in favor of bus transportation. The abandoned railbed has since been designated a national park and is maintained by the Bermuda Parks Department. The rugged trail was divided into nine sections that were broken and in some cases difficult to access. Friends of Bermuda Railway Trail undertook the job to connect the links. The Murphy family funded the project by raising capital locally from private companies and individuals. The nonprofit found the E.T. Techtonics product through an internet search. But there was one major hurdle. Design parameters called for a clear span bridge 152 ft. long and 8 ft. wide. The maximum length for E.T. Techtonics profiles was 120 ft. long with a double truss system above and below the deck. 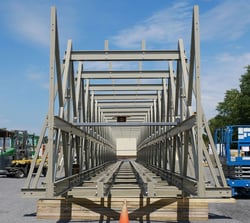 The Friends of Bermuda Railway considered several designs including a Leonardo da Vinci arch bridge. But E. T. Techtonics’ pultruded profiles offered several advantages that tipped the group’s decision. The corrosion-resistant, light weight components could be kitted and shipped economically and easily assembled near the job site. The nonprofit wanted to minimize disruption to marine life while preserving the look and feel of the historic railway. The original trestle was 40 ft. high with steep grades on either side. Piers with wooden supports were built on concrete pilons. Two groups of four pilons remained. The new FRP bridge design incorporated use of the concrete pilons as its support structure. The FRP pedestrian bridge also had the ability to blend with its surroundings and leave Bermuda’s sweeping vistas unobstructed. To validate the design and reach the new length requirement engineers had to perform a number of tests. 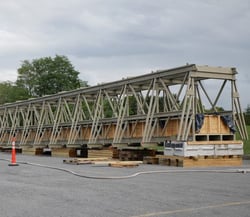 Section testing on unique components and connections was conducted by the University of Miami and West Virginia University. FRP profiles were pultruded, fabricated and readied for assembly and final testing at CCG’s Creative Pultrusions campus. Following structural element testing, two full-scale tests were performed to address construction restrictions and maximum load. Because the job site was in the middle of the water, top-down construction was not an option. A lift test was performed to make sure that the large crane at the Bermuda job site could effectively pick up the entire bridge span based on a pre-specified rigging and pick plan. Maximum design load was tested by uniformly placing wooden holding tanks along the bridge deck surface and filled with water to simulate the bridge filled to capacity with people. The results met design parameters for safety and performance. The bridge was then disassembled, packaged, and readied for shipment to Bermuda.

The typical shipping container has a maximum length of 40 ft. CCG’s E.T. Techtonics bridge team had to meet a size requirement of approximately 39 ft. when it kitted the light weight bridge components for overseas travel. Friends of Bermuda Railway Trail and a small crew met the container, unpacked it and re-assembled the bridge in a manner very like that of an Erector Set. The entire 152 ft. long bridge was assembled near the project’s location. Following pre-approved rigging instructions, the entire span was lifted by a crane and placed on a barge where it was ferried to the installation site. Once the barge reached the work site, it was moved into position and lifted onto the existing concrete foundation with a crane. Watch the video on the left to see footage of the actual installation, or view it here. Approach spans to the FRP bridge will added sometime in April or May.

The clear span is the first of several FRP bridges that will be installed in Phase 2 of the project currently underway. For the bridge market, this structure serves as a construction milestone for FRP composite technology. For visitors and Bermudians, it will provide access and a different perspective to the scenery and the marine life that travel the inlet.

Creative Composites Group provides a comprehensive range of standard and customized FRP products to meet your project needs. Looking for more information about how we can help bring your project to life? Contact our staff of expert engineers today.