And the Rockets Red Glare ... Over the Brooklyn Bridge

On July 8, 1776, Philadelphians heard the first public readings of the Declaration of Independence against a backdrop of ringing bells and band music. The following year the city chose July 4th to celebrate the country’s birthday.  Interest in recognizing the special day spread to other towns and was commonplace by the close of the War of 1812. Congress established Independence Day as a holiday in 1870. In 1938 Congress earmarked the day as a paid holiday for federal employees. 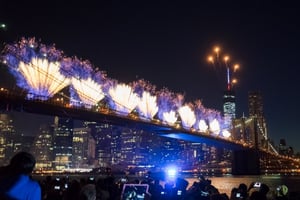 In June of 1826, Thomas Jefferson, who was quite ill, wrote these words about the document on its 50th anniversary: “May it be to the world, what I believe it will be ... the signal of arousing men to burst the chains ... and to assume the blessings and security of self-government.  That form, which we have substituted, restores the free right to the unbounded exercise of reason and freedom of opinion. All eyes are opened, or opening, to the rights of man. ...For ourselves, let the annual return of this day forever refresh our recollections of these rights, and an undiminished devotion to them."

Today, Americans from state to state mark the holiday with parades, fireworks, picnics, outdoor concerts, and other special events. One such spectacle happens to take place around a bridge with its own claim to fame. For the past 43 years Macy’s Department Store has thrilled New Yorkers and visitors with what is considered the nation’s largest fireworks display. This year pyrotechnics will be launched from the Brooklyn Bridge and four barges positioned on the lower East River. The show will also be televised. But according to Executive Producer Susan Tercero, the Brooklyn Bridge gets star billing.  Built in 1883, the structure was the first steel-wire suspension bridge and the longest suspension bridge in the world.

Whether you plan on being a spectator at Macy’s extravaganza or simply enjoying a cookout with family before heading out to watch the local fireworks display, take a moment to remember the words of Thomas Jefferson. Happy Fourth.