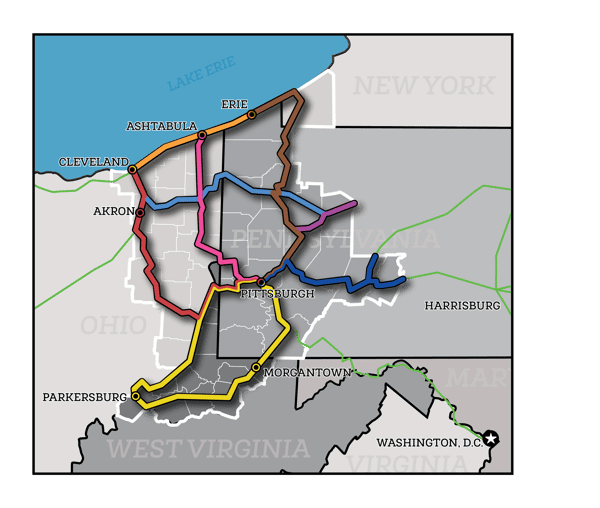 The administration unveiled a plan for fixing the nation’s infrastructure in February.  In 2020, federal transportation legislation will come due for renewal. The Rails-to-Trails Conservancy has deemed the timing right and formed a Trails Transform America campaign to ask Congress and the White House to include trails, walking and biking in the final infrastructure bill.  Headquartered in Washington D.C., RTC has regional offices in California, Florida, Ohio, and Pennsylvania.  The Conservancy believes that for communities to thrive, urban, suburban and rural trail networks are essential.

The drive to extend the reach of trail networks dovetails nicely with the composite industry’s push to also include Fiber Reinforced Polymer (FRP) bridge and bridge deck products in the proposed legislation. In February members of the American Composites Manufacturers Association (ACMA) met with elected officials, staff members and one of the architects of the Infrastructure Plan to talk about the value of advanced materials.

In a hearing this month before the U.S. House of Representatives Subcommittee on Research and Technology of the Committee on Science, Space, and Technology, Representative Daniel Lipinski (D-IL) said, “As we make plans to shore up our infrastructure and build for the future, we must take advantage of all the tools at our disposal. This includes using innovative technologies and emerging materials where they offer the best value for a project. Materials such as fiber reinforced polymer composites, or advanced composites…may play a key role in how the nation addresses its challenges under constrained resources.”

Composite Advantage’s FiberSPAN FRP bridges and bridge decks have found a strong market niche in the trail bridge arena due to the material characteristics of its products. Because bridge deck panels don’t corrode there is zero maintenance giving its products a life cycle of 100 years. The cost savings that result from eliminating upkeep has gained the attention of groups like the RTC.

FRP composites are an engineered material. Polymers support and protect high-strength fiber reinforcements from corrosion and the effects of environmental factors such as salt water, deicing chemicals, oils, acids and UV radiation.  One of the oldest FRP trail bridges was installed in 1996 on a bicycle path in Ohio where it has been exposed to snow, ice and cold temperatures for more than two decades. Regular inspections have found the structure damage free.

The need to shave long-term costs has decision makers listening up and down the supply chain. A closer look at a major project that includes Ohio [where Composite Advantage is headquartered] shows the broad scope of influence wielded by the RTC.  The Industrial Heartland Trails Coalition (IHTC) wants to establish the Industrial Heartland as a premier destination offering a 1,500-miles-plus multiuse trail network experience.

According to RTC, the 238-mile Parkersburg to Pittsburgh (P2P) rail-trail is nearly 80 percent complete. There are a few gaps that exist in West Virginia that are key to opening a 150-miles-plus stretch of the rail-trail from Parkersburg to the Pennsylvania border. A recent study by Rails-to-Trails Conservancy finds that these gaps could be closed, and the potential of the corridor realized, within the next decade.

This month the RTC announced that just 22 miles remain in West Virginia’s decades-long push to complete a world-class amenity that will have a dramatic impact on the region’s economy. Local municipalities and trail groups are working closely to move the project forward.

You can also read more about it by taking a look at the P2P feasibility study.

It’s a lot of trail and these counties may just need an FRP trail bridge system or two.